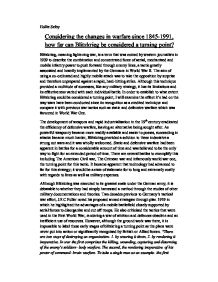 Considering the changes in warfare 1845-1991 how far can Blitzkrieg be considered a turning point?

Hollie Selby Considering the changes in warfare since 1845-1991, how far can Blitzkrieg be considered a turning point? Blitzkrieg, meaning lightening war, is a term that was coined by western journalists in 1939 to describe the combination and concentrated force of aerial, mechanized and mobile infantry power to push forward through enemy lines, a tactic greatly associated and heavily implemented by the Germans in World War II. The aim of using a co-ordinated and highly mobile attack was to take the opposition by surprise and therefore unprepared against a rapid, hard-hitting strike. Although this technique provided a multitude of successes, like any military strategy, it has its limitations and its effectiveness varied with each individual battle. In order to establish to what extent Blitzkrieg could be considered a turning point, I will examine the effect it's had on the way wars have been conducted since its recognition as a credited technique and compare it with previous war tactics such as static and defensive warfare which was favoured in World War One. The development of weapons and rapid industrialisation in the 19th century eradicated the efficiency of defensive warfare, leaving an alternative being sought after. ...read more.

Even without the application of Blitzkrieg, did Poland really stand a fighting chance against the German Army? This theory is also applicable to the Germans invasion of France in 1940, they had spent a large amount of their military budget on defence tactic such as the Maginot Line instead of up-dating their arms industry and investing in modern technology, the French High Command in 1940 was not even equipped with radio to control their forces effectively. If allied countries had been less conservative in their views by preparing themselves for a repeat of World War One, would this of not made Blitzkrieg less effective, if not obsolete? As Blitzkrieg had never been used at such a large scale and to such effect before the Germans employed it, there were factors which the opposition could exploit, causing it to be considered less of a turning point. Hitler and other leading German military minds had not pre-anticipated the full importance of maintaining air superiority throughout the duration of the war. However, allied forces, particularly Britain, understood that aerial supremacy was crucial to overcoming the force of a Blitzkrieg attack. If one component of blitzkrieg is overtaken, the rest would unwillingly fall apart. ...read more.

Since its debut in 1939, blitzkrieg has been applied to almost all war efforts and to what appears great success. However, I believe its victories relied heavily upon the weaknesses of the opponent as described in the triumphs over France and Poland, if other countries had not been so conservative in the tactics and developed their arms industry instead of relying heavily upon defenses I do not think that Blitzkrieg would have accomplished such success. Along with this, I think as a tactic it was developed to coincide with the advancing technologies that were becoming available rather than a break-through in strategy. It is still not a flawless technique that can be executed with precise accuracy each time; logistics and limitation still hinder it from being a seamless process. Overall, I believe it was the technology at the forefront of being a turning point, blitzkrieg develops and changes with each new advancements and although I believe it to have significant input in the way war efforts are conducted, I do not think it is successful enough as a strategy alone to be deemed a turning point.1 [1] J.F.C Fuller on the concept of Blitzkrieg tactics - "Military history of the western world" [2] Accounts of an unknown German Prisoner - http://www.2worldwar2.com/principles-of-war.htm [3] The Rommel papers - Field Marshall Erwin Rommel on air superiority -1953 ?? ?? ?? ?? ...read more.