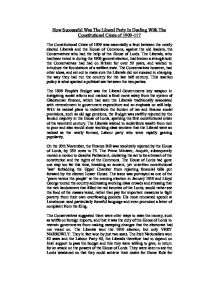 How Successful Was The Liberal Party In Dealing With The Constitutional Crisis of 1909-11? The Constitutional Crisis of 1909 was essentially a feud between the newly elected Liberals and the House of Commons, against the old leaders, the Conservatives who had the help of the House of Lords. The Liberals, who had been voted in during the 1906 general election, had broken a stranglehold the Conservatives had had on Britain for over 50 years, and wished to introduce the foundations of a welfare state. The Conservatives however, had other ideas, and set out to make sure the Liberals did not succeed in changing the way they had run the country for the last half century. This reaction policy is what sparked a political war between the two parties. The 1909 People's Budget was the Liberal Governments key weapon in instigating social reform and marked a final move away from the system of Gladstonian finance, which had seen the Liberals traditionally associated with retrenchment in government expenditure and an emphasis on self-help. With its radical plans to redistribute the burden of tax and finance social provisions, such as old age pensions, the Budget was swiftly rejected by the landed majority in the House of Lords, sparking the first constitutional crisis of the twentieth century. ...read more.

As the Commons were able to show a majority for the Budget, endorsed by an election, the Lords at last agreed to pass the budget. However their overall political position was weakened as they were now in dependant on the Irish Nationalists, who were determined to achieve Home Rule, an issue which was highly controversial amongst politicians and the British public alike. This issue was very difficult to resolve and with hindsight would drag on for a very long time to come. On the other hand, although the Conservatives had reclaimed the majority of the seats they had lost in the 1906 elections, the Liberals still won an important moral victory over the Lords and Conservative opposition. Politically the budget was also of high importance as it allowed the Commons to achieve a lasting victory of the House of Lords. The second Constitutional Crisis came over the Parliament Act of 1911. The Liberals were determined that the House of Lords should never again block a measure passed by the House of Commons. In 1910, they therefore drew up a bill to curb the power of the House of Lords by taking away its power of veto. The 1910 Parliament Bill proposed that the House of Lords was to have no power to amend or reject those bills that the speaker of the Commons certified to be true money bills. ...read more.

However the passing of the Parliament Act was in some terms a great success as it ensured British constitution was more democratic and never again could the Lords permanently override the Commons and therefore political power had shifted decisively to the lower house. For example, there had never been a British Prime Minister sitting in the Lords since this date. There was also to be more frequent elections as the span of a government was reduced from 7 to 5 years, this meant the public would vote on who they wanted in government more often which meant a party could not develop such a long stint in power without having the full backing of the majority. In conclusion, I feel the Liberal Party were not very successful throughout the Constitutional Crisis (1909-11) because although they won both elections involved and therefore passed the Budget of 1909 and the Parliament Act of 1911 and I also agree that the Liberals were successful in containing the constitutional crises however they became two dependant on other parties and this left them vulnerable to being 'exploited'. They should therefore be deemed as unsuccessful as they lost over 100 seats since their 'landslide' victory of 1906, and also because they only managed scrape a majority in the two elections because of heavy dependency on the Irish Nationalists and the Labour Party. ...read more.