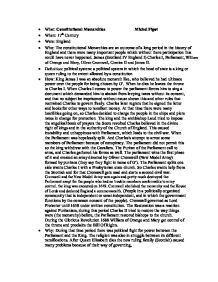 * What: Constitutional Monarchies Michel Figot * When: 17th Century * Were: England * Who: The constitutional Monarchies are an outcome of a long period in the history of England and there were many important people which without there participation this could have never happened. James (Scotland IV England I) Charles I, Parliament, William of Orange and Mary, Oliver Cromwell, Charles II and James II. * Definition: political system: a political system in which the head of state is a king or queen ruling to the extent allowed by a constitution * How: King James I was an absolute monarch like, who believed he had ultimate power over the people for being chosen by G'. When he dies he leaves the throne to Charles I. When Charles I comes to power the parliament forces him to sing a document which demanded him to abstain from levying taxes without its consent, and that no subject be imprisoned without cause shown this and other rules that restrained Charles to govern freely. Charles later regrets that he signed the letter and looks for other ways to recollect money. At that time there were many hostilities going on, so Charles decided to charge the people in the ships and piers taxes in change for protection. The king and the archbishop Laud tried to impose the angelical book of prayers the Scots revolted Charles believed in the divine right of kings and in the authority of the Church of England. ...read more.

The purpose of this was to give less power (in last word taking to the monarch) and gave more power to the Parliament. After this there was a series of battles for power and at the end William the II gain the power in England and James lost the throne went to France were he allied with King Louis XIV and attempted to be king again in Ireland but failed. The Glorious Revolution James II soon lost the goodwill he had inherited. He was too harsh in his suppression of a revolt by James Scott, Duke of Monmouth (an illegitimate son of Charles), in 1685; he created a standing army; and he put Roman Catholics in the government, army, and university. In 1688 his Declaration of Indulgence, allowing Dissenters and Catholics to worship freely, and the birth of a son, which set up a Roman Catholic succession, prompted James's opponents to invite William of Orange, a Protestant and stadtholder of the Netherlands and husband of the king's elder daughter, Mary, to come to safeguard Mary's inheritance. When William landed, James fled, his army having deserted to William. William was given temporary control of the government. Parliament in 1689 gave him and Mary the crown jointly, provided that they affirm the Bill of Rights listing and condemning the abuses of James. ...read more.

* Charles I o Petition of right. Tax rules o Ship money taxes the people paid for protection o Puritans hate the Anglican church and want to make it pure and this o * leads to the English civil war o Charles is capture and looses power o Oliver Cromwell goes to war against him COMONWEALTH 1649 end of civil war Charles I is executed restoration of monarchy this helps to get the monarchy thing back James II sympathetic Catholicism but he eventually gave into the catholic church * James II (1685-88): Brother of Charles I, openly Catholic, James vs. Parliament on his strong support for Catholicism. *Glorious Revolution (1688): William of Orange, husband of James's daughter Mary, invited to invade England and seize the throne. James with almost no resistance William and Mary become the new monarchs of England. William and Mary accepted the throne and all its provisions of a Declaration of Rights. Who: James I, English Parliament, Charles I, Oliver Cromwell, Charles II, James II, William of Orange and Mary Why: Power struggle in attempts to find a balance between the rule of the Parliament and the monarchy. Also, Queen Elizabeth was the last of the Tudors and James brought the Stuart family into power. Thus, the new family caused conflicts. divine right di�vine right noun monarch's supposed God-given right: the belief that the monarch's authority comes directly from God rather than from the people Cromwell governed as Lord Protector from 1653 to 1658 under England's only written constitution ...read more.