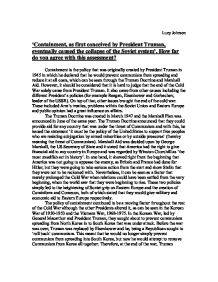 'Containment, as first conceived by President Truman, eventually caused the collapse of the Soviet system'. How far do you agree with this assessment?

Lucy Johnson 'Containment, as first conceived by President Truman, eventually caused the collapse of the Soviet system'. How far do you agree with this assessment? Containment is the policy that was originally created by President Truman in 1945 in which he declared that he would prevent communism from spreading and reduce it at all costs, which can be seen through the Truman Doctrine and Marshall Aid. However, it should be considered that it is hard to judge that the end of the Cold War solely came from President Truman. It also came from other causes including the different President's policies (for example Reagan, Eisenhower and Gorbachev, leader of the USSR). On top of that, other issues brought the end of the cold war. These included Arm's treaties, problems within the Soviet Union and Eastern Europe and public opinion had a great influence on affairs. The Truman Doctrine was created in March 1947 and the Marshall Plan was announced in June of the same year. The Truman Doctrine announced that they could provide aid for any country that was under the threat of Communism and with this, he issued the statement 'it must be the policy of the United States to support free peoples who are resisting subjugation by armed minorities or by outside pressures' (thereby meaning the threat of Communism). ...read more.

Nixon was the president who realized that he had to make peace with the Far East if he was to remain popular, as America had been fighting the Vietnam War for nearly ten years. He set about make peace talks and ended the Vietnam War. Therefore, by taking this point of view, it can be said the Cold War ended because of peace talks, negotiations and a general weariness and fear of the tension. And so, with this in mind, it can be said that containment did help to bring an end to the Cold War as America showed the Soviet Union that they were prepared to go to battle and even fight to stop the spreading of the 'evil empire' (as Reagan put it). This argument is backed by Robert Gates who claimed that Reagan had seen how containment could work but at the end of the day, he needed to stand up to Russia, with a stronger stance, and prove to him that they were not going to subside to appeasement. On the other hand, it scared the USSR even further and this made the relations even tighter as well as control on Eastern Europe. ...read more.

The START talks in the summer of 1991 are also an example of an event that marked the end of the Cold War. These were talks where they promised to reduce the number of nuclear targets aimed at one another. With this, many historians have argued that the Cold War was now finally over. Therefore, in conclusion, it can be said that Truman's policy of containment did bring about the end of the Cold War as it showed the Soviet Union that America was not going to appease them and that they would fight at all costs to stop communism spreading. This policy that was used all the way until 1991 with the Gulf War preventing communism from spreading (with the exception of South Vietnam) and therefore making it weaker. On the other hand, personalities played a huge role in the diminishing of the Cold War. For example, Gorbachev was the leader of Russia and who wanted an end to the Cold War so that he could focus on restoring his country. He went through series of peace and arms reduction talks with Reagan and these were the physical signs to the end of the war. Public opinion also played a large role as it meant that the leaders had to abandon violence and turn to peace in order to keep their popularity. ...read more.