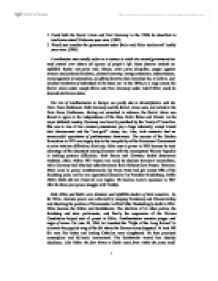 Could both the Soviet Union and Nazi Germany in the 1930s be described as totalitarian states? Elaborate your view. (1991)

1. Could both the Soviet Union and Nazi Germany in the 1930s be described as totalitarian states? Elaborate your view. (1991) 2. Would you consider the governments under Stalin and Hitler totalitarian? Justify your view. (1995) A totalitarian state usually refers to a country in which the central government has total control over almost all aspects of people's life. Main features include an infallible leader, one-party rule, elitism, strict party discipline, purges against enemies and political dissidents, planned economy, strong armaments, indoctrination, encouragement of nationalism, an official doctrine that everybody has to believe, and absolute obedience of individuals to the State, etc. In the 1930s, to a large extent, the Soviet Union under Joseph Stalin and Nazi Germany under Adolf Hitler could be deemed totalitarian states. The rise of totalitarianism in Europe was partly due to dissatisfaction with the Paris Peace Settlement. Both Germany and the Soviet Union were not invited to the Paris Peace Conference. Having not consulted in advance, the Soviet Union was forced to agree to the independence of the three Baltic States and Poland. As the major defeated country, Germany was heavily punished by the Treaty of Versailles. She was to lose all her overseas possessions, pay a huge indemnity, accept almost total disarmament and the "war-guilt" clause, etc. Also, both countries had an unsuccessful experiment of parliamentary democracy. The success of the October Revolution in 1917 was largely due to the incapability of the Provisional Government to solve wartime difficulties. ...read more.

Their ideologies claimed to explain and integrate all aspects of human existence. Both persecuted and humiliated many intellectuals who dared to question their infallibility. In a totalitarian state there is usually a group of people suffering from political persecution and taken as scapegoats for all misfortune. In Germany Jews suffered the most. Anti-Semitism was codified by the Nuremberg Law of 1933. The Law to Restore the Professional Bureaucracy expelled all Jews from public offices. There saw official boycott of Jewish shops. Jewish property was looted. Millions of Jews were sent to concentration camps and shot to purify the Aryan race. David Thomson says, "Ballyhoo and brutality were made the foundations of the State". In the Soviet Union, Stalin aimed at total liquidation of the class of kulaks. According to Marxism, kulaks were an exploiting feudal class and had to be eliminated. Besides, Stalin's programme of farm collectivization aroused strong opposition from all kulaks. He simply replied with ruthless suppression. About 200,000 kulaks were killed, exiled or sent to forced labour camps. This nearly led to a civil war in 1929-31. Anti-Semitism also occurred. In a totalitarian state a variety of fringe benefits are provided if people are absolutely obedient to the State. In the Soviet Union under the 1936 Constitution old age pension, sickness allowance and labour codes for workers were stated. There were also state health services and expansion of education. ...read more.

Collectivization of farms was also conducted in full swing to increase agricultural production and liberate peasants from soil. As a result, both Nazi Germany and the Soviet Union were able to escape the ill-effects of the Great Depression and provided people with full employment. Nationalism is an element of totalitarianism. In Germany it was manifested by the racist and expansionist Nazi foreign policy. Other than repudiating the Treaty of Versailles, Hitler claimed that Germans were the master race entitled to seek any "living space" everywhere. Hitler carried out conscription, built up strong armaments, withdrew from both the Geneva Disarmament Conference and League of Nations, annexed Austria and Czechoslovakia, and finally invaded Poland. All were to satisfy the popular nostalgic hankering of the return of German greatness. By contrast, Stalin's foreign policy during the 1930s seemed to be pacifist. Before 1945 Stalin made no direct territorial annexation for Russia. He joined the League of Nations and disbanded the Comintern. By "Socialism in One Country" he promised not to support proletarian revolutions overseas. In fact, he just wanted to fish in troubled water over the hostility between Nazi Germany and the western democratic countries. In 1939 he signed the Nazi-Soviet Non-Aggression Pact, intending to get back the three Baltic States. Facing the imminent Nazi threat, moreover, Stalin gave up the Marxist idea of internationalism but stirred up enthusiasm of Russian nationalism at home. Hence, both aimed at territorial expansion. To conclude, both Stalin's Soviet Union and Hitler's Nazi Germany during the 1930s could be considered totalitarian states to a very large extent. 1 1 ...read more.