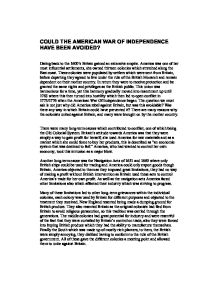 Could the American War of Independence Have Been Avoided?

COULD THE AMERICAN WAR OF INDEPENDENCE HAVE BEEN AVOIDED? Dating back to the 1600's Britain gained an extensive empire. America was one of her most influential settlements, she owned thirteen colonies which stretched along the East coast. These colonies were populated by settlers which were sent from Britain, before departing they agreed to live under the rule of the British Monarch and remain dependent on their mother country. In return they were to receive protection and be granted the same rights and privileges as the British public. This union was harmonious for a time, yet this harmony gradually moved into resentment up until 1763 where this then turned into hostility which then led to open conflict in 1775/1776 when the American War Of Independence began. The question we must ask is not just why did America rebel against Britain, but was this avoidable? Was there any way in which Britain could have prevented it? There are many reasons why the colonists united against Britain, and many were brought on by the mother country. There were many long-term causes which contributed to conflict, one of which being the Old Colonial System. ...read more.

The colonists saw this as an attempt by the British to ensure control over them. Another short-term cause was the strict application of the Navigation Acts after 1763 which gave Britain complete control over American trade, this basically stated that any goods that America produced could not be directly exported but must be firstly sent to Britain who would then put a tax on them and sell them on to other countries. America grudgingly accepted Britain's ploy to gain profit although it did cause resentment to build. There was also an economic conflict which arose from the ending of this war which was fundamental cause for the war. The war had been expensive for Britain and she looked to America for funds, as it was them she was protecting, she went about this collection of money by taxing her American colonies. Britain imposed the Stamp Act of 1765, which upset the influential classes in America, this act was later repealed but in the same year, 1766, the Declaratory Act was passed which stated that Britain had the right to tax, this was a dangerous move for the British as it outraged the colonists. ...read more.

This spelled out the fact that America was going to fight for her independence and free herself from the mother country of Britain. Therefore could the American War of Independence have been avoided? This could never definitely be concluded, but I think that Britain could have kept her American colony for longer. Of course there were causes of the war which were impossible to avoid, like America's bond with Britain naturally becoming weaker as the generations moved on. Yet it is apparent that the colonists did hold a large amount of respect for Britain up until conflict over trade. Even after the war many people were still loyal to Britain. Also the physical time and difference between America and Britain was a problem which couldn't be solved. Yet we must consider how long a mother country can hold on to a colony which is more advanced than them, America had become more democratic than Britain. But, there were still too many factors which could have been avoided quite easily. I conclude that if Britain had taken time to overcome her ignorance of her American colonies, in situations such as the Punishment of Massachusetts which were doing more harm than good, then the war could have been avoided. ...read more.