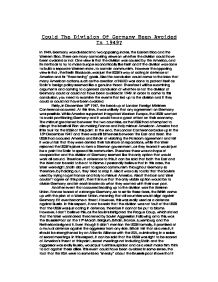 Could The Division Of Germany Been Avoided In 1949?

Could The Division Of Germany Been Avoided In 1949? In 1949, Germany was divided into two opposing states, the Eastern Bloc and the Western Bloc. There are many contrasting views on whether the division could have been avoided or not. One view is that the division was caused by the America, and its methods to try to make Europe economically like itself and if the division was done to build a separate Western state, to contain communism. However the opposing view is that, the Berlin Blockade, was just the USSR's way of acting in defence of America and its "threatening" goals. Also the conclusion could come to the idea that many American actions, such as the creation of NATO was done to protect itself as Stalin's foreign policy seemed like a genuine threat. Therefore I will be examining arguments and coming to a general conclusion of whether or not the division of Germany could or could not have been avoided in 1949. In order to come to this conclusion, you need to examine the events that led up to the division and if they could or could not have been avoided. Firstly, in December 15th 1947, the break up of London Foreign Ministers Conference occurred. At this time, it was unlikely that any agreement on Germany was possible. ...read more.

To fuel the argument that the blame was mostly on the Soviets fault, was the Consolidation of the Eastern Bloc. By June 1948, the Cominform was used as a powerful weapon to control the Soviet Bloc. Even though it seemed that each state in the Bloc was, "independent", they all had to have the same culture, military, social and economic policies. This was hardly a state of "independence". Therefore, there was no more diversity in Eastern Europe, as there was before. Communists seized power in Czechoslovakia and strengthened their power in Hungary. Furthermore, a Peoples Independence Front was set up in the elections in May 1949 and the Communist party controlled it. Only properly approved candidates could run, not anyone else. Gomulka wanted a socialist society that would reflect how Poland was really like was forced to resign in August and then put in jail. This can show how the USA was right, that the USSR just wanted to spread its communism and it can be said that the USA actions in the division were acceptable to contain communism. After all they didn't want to stop entirely communism, just contain it to areas that Stalin controlled, such as the USSR. What power did the USSR have to impose its policies on others? ...read more.

Also, Stalin's attempts to force the West into his way of thinking, or even reconsidering, just made dividing Germany a faster process, therefore, it can be said that there was no other way than to create that East German state. It seems that the division of Germany and Europe was going to happen. However, even if Stalin got his way, its unlikely that, if Stalin got his way, that Germany would remain, truly a genuine independent and neutral country ((reference to Peoples Independence Front). Voices from America and London, showed that it was obvious that most of the Western Europeans preferred a divided Germany and a West Europe that was protected by American military presence. Therefore, even if Stalin was scared of USA actions, he still used force to try and get his way in the Berlin Blockade, an undiplomatic way of thinking. The division was inevitable, it would happen eventually, as the allies just had clearly different aims, the USSR wanted one thing while the USA and Britain wanted another. Stalin would have wanted to spread Communism and the West tried to stop it. Actions by America provoked responses by Soviets, which then provoked further actions by America. It was a vicious cycle. George Keenan and General Robertson may believe there were alternatives to the partition of Germany, but I believe it was inevitable. ...read more.