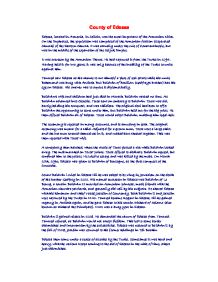 County of Edessa Edessa, located in Armenia, in Celicia, was the most important of the Armenian cities. On the Euphrates, the population was comprised of the Armenian faction (Separated Church) of the Eastern Church. It was actually under the rule of Constantinople, but was in the middle of the expansion of the Seljuk Empire. It was overseen by the Armenian Thoros. He had captured it from the Turks in 1094. Having held it for two years, it was only because of the inability of the Turks to unite against him. Tancred saw Edessa as his chance to cut himself a piece of real estate while his uncle Bohemond was busy with Antioch. But Baldwin of Bouillon (Godfrey's brother) has his eye on Edessa. His answer was to aquire it diplomatically. Baldwin's wife and children had just died in Marash. Baldwin wasted no time. As Baldwin advanced into Ciecelia, Toros sent an embassy to Baldwin. ...read more.

1104 was a busy year in Edessa. Baldwin ll gained release in 1108. He demanded the return of Edessa from Tancred. Tancred refused, as Baldwin would not accept fiefdom. This led to some border skirmishes and intervention by the eccleasticies. Edessa was restored to Baldwin ll by the fall of 1108. Joscelin was returned to his former holdings in Tell Bashin. Edessa then came under a series of attacks by the Turks. Sometimes it was hard and heavy, with the various troops coming to the aid of Edessa in the nick of time, others just skirmishes. In 1118, Baldwin l of Jerusalem (Boulogne) died. This left a hole in the successorship. After a great meeting of all the heads of the principalities, it was decided that Count Baldwin ll of Edessa (Le Bourg) should be Baldwin ll of Jerusalem. With the Count seat vacent, it was decided in 1119 that Joscelin should become Count of Edessa. ...read more.

He was thwarted. He turned to the Crusaders again, attacking outposts. He tried Damascus again in 1140, failed again and went back to waring on his rivals. Joscelin ll then took to residing in the old family home at Tell Bashin, instead of the capitol in Edessa. He seemed to enjoy the pleasures of the Court rather than attending to business. He felt secure. He argued with Raymond of Tripoli. They were so openly hostile that they both refused to come to each others aid. This left the door open for Zengi. By 1143 he had treaties in place with most of his Arab rivals. He turned to the Franks again. He suceeded in several cities, and Joscelin ll moved to Aleppo. The capitol of Edessa was empty. Zengi found out, advanced and laid seige to the city in 1144. Joselin appealed to Raymond for support. Raymond refused. Edessa fell in December 1144, and the rest of the country fell after. The first of the Crusader Conquests became the first to be lost. ...read more.