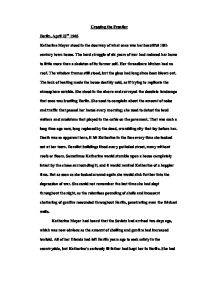 Crossing the Frontier Berlin, April 23rd 1945 Katherine Meyer stood in the doorway of what once was her beautiful 18th century town house. The hard struggle of six years of war had reduced her home to little more than a skeleton of its former self. Her threadbare kitchen had no roof. The window frames still stood, but the glass had long since been blown out. The lack of heating made the house deathly cold, as if trying to replicate the atmosphere outside. She stood in the alcove and surveyed the desolate landscape that once was bustling Berlin. She used to complain about the amount of noise and traffic that passed her house every morning; she used to detest the loud waiters and musicians that played in the caf�s on the pavement. That was such a long time ago now, long replaced by the dead, crumbling city that lay before her. Death was so apparent here, it hit Katherine in the face every time she looked out at her town. Derelict buildings lined every potholed street, many without roofs or floors. Sometimes Katherine would stumble upon a house completely intact by the chaos surrounding it, and it would remind Katherine of a happier time. But as soon as she looked around again she would sink further into the depression of war. ...read more.

She knew all too well what would have happened to the baker and his wife, and shuddered with dread at the thought. The rubble itself was blocking the road, rising about five feet in the air, and was impassable. Katherine went to turn the other way, and came face to face with a Soviet soldier. Katherine's first instinct was to turn and run, attempt to scramble over the remains of the bakery. However, she noticed that the Soviet's left hand was firmly in his pocket, as if he was clutching onto something. A gun, Katherine thought. She stood in silence, facing him, a thousand scenarios racing inside her head, trying to think of a way out. Just as she was about to say something, the Soviet soldier went to speak. Katherine closed her eyes. To her sheer amazement, he started to sing. He was more shouting than singing, and Katherine quickly realised he was drunk. He was gently swaying from side to side, as if he no longer had full command over his legs. He suddenly pulled his hand from his pocket, and Katherine's heart stopped. Drunk men could be very unpredictable. In a split second he had pulled an object from his pocket, and raised it to Katherine. Her heart skipped a beat. Her mouth went dry. She risked a glance at the object being pointed at her and relief flowed through her veins. She saw it was a flask. ...read more.

Katherine approached the mass of Soviet soldiers with extreme caution, keeping her head down. She told the young boy to do the same, and to avoid eye contact with any soldier. The further through the throng of soldiers they went, the tighter they gripped each other's hand. They picked their way through potholes, campfires, tents and dancing Soviet soldiers, many of whom, Katherine noticed, were drunk. The smell of alcohol was strong in the air. Suddenly, the young boy stumbled, his tired legs faltering for a single moment. He fell at the feet of a Soviet, who instantly recognised him as a German. Katherine pulled him up, and clamped a hand in his shoulder. She stared at the Soviet, and he stared back. She saw kindness in his eyes, and he smiled at her. He moved aside, and let them pass. She was eternally grateful to him, even though she would never see the soldier again. They carried on walking for another three or four miles, until they came to a bridge. Katherine decided to stop for a moment, and dangle her legs into the refreshingly ice cold water that flowed below. The young boy scuttled off under the bridge, noticing something hidden in the tall grass. With all the strength he could muster he pulled out a rusty bicycle, with two flat tires and no saddle. She smiled, and then she laughed. She hugged the young boy. For the first time in six years she thought she might, finally, be safe. ...read more.