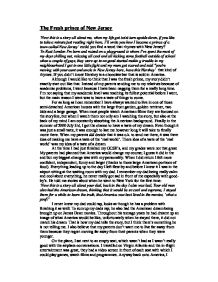 The Fresh prince of New Jersey 'Now this is a story all about me, when my life got twist turn upside down, if you like to take a minute just reading right here, I'll write you how I became a prince of a town called New Jersey' could you find a word that rhymes with New Jersey? 'In East London I'm born and raised on a playground is where I've spent the most of my days chilling out, relaxing all cool and all kicking some football outside of school when a couple of guys, they were up to no good started making trouble in my neighbourhood I got in one little fight and my mum got scared and said "you're moving with your aunt and uncle in New Jersey here, have this Hershey' that kind of rhymes. If you didn't know Hershey is a chocolate bar that is sold in America. Although I would like to think that I was the fresh prince, my story didn't exactly start out like that. Instead of my parents sending me to my relatives because of academic problems, I went because I have been nagging them for a really long time. I'm not saying that my academic level was reaching its fullest potential before I went, but the main reason I went was to have a taste of things to come. ...read more.

I said thanks to the first American I made contact with and walked over to them. We did the usually Portuguese custom and did the kiss on the cheeks thing. I originally thought that communication between us would be easy, but boy did I wish I brought my translator. They could barely understand me, and the fact that my ears were still popped from the plane journey didn't help either. I felt like a deaf, posh Wally (as in Where's Wally). The next day when I woke up, I had that weird feeling when I wake up in a different room and don't know where I am (it was like that film Memento). Then I got up and looked at the picture of 'the statue of liberty' on the desk and remembered when I was on the plane. I woke up to Independence Day and before I knew it I was on my way to a barbecue. It was a beautiful sunny day and boy was it hot! I wore light cloths but it was way hotter then I thought it would be. When I arrived there I met 'The Martins', they suited the typical average American household family everything apart from the golden retriever. ...read more.

When I finally plucked up the courage to get on the roof the view was beautiful. You could see for miles, all the wonders of New York were in view from one place. When I returned showing my photos from the roof, my friends thought that I was on a helicopter. On my visit to the big green woman, I actually realised clearly how large she was up-close. I thought about how long she has been there for, everything she would have seen. Throughout seeing all the sites a common image would occur to me of re-visiting these sites when I move to America. For me New York was a place to visit not to live in. I have always wanted to live in the house from Home Alone, which is set in Chicago. I have always like the Christmassy look. Returning back to England was weird as when I went to America. Once again no-body could understand me (by now I have an American accent), I had to get use to the money as well. The weird thing about America is that when you get use to it you don't even realise that you are living in America. Although you are use to it, you still notice differences here and there. My American dream is still there, its just a matter of until I make it into reality. ...read more.