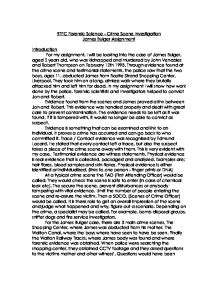 BTEC Forensic Science - Crime Scene Investigation James Bulger Assignment Introduction For my assignment, I will be looking into the case of James Bulger, aged 2 years old, who was kidnapped and murdered by John Venables and Robert Thompson on February 12th 1993. Through evidence found at the crime scene and testimonial statements, the police saw that the two boys, ages 11, abducted James from Bootle Strand Shopping Center, Liverpool. They took him on a long, aimless walk where they brutally attacked him and left him for dead. In my assignment I will show how work done by the police, forensic scientists and Investigators helped to convict Jon and Robert. Evidence found from the scenes and James proved a link between Jon and Robert. This evidence was handled properly and dealt with great care to prevent contamination. The evidence needs to be left as it was found. If it is tampered with, it would no longer be able to convict as suspect. Evidence is something that can be examined and link to an individual. It proves a crime has occurred and can go back to who committed it. ...read more.

Trace evidence could have been obtained. There was a FAO called to the Walton Railway tracks as a body had been found. Forensic Scientists would have come to examine it. They would look for DNA, hair fibres or anything to link something to a suspect. SOCO's tried to analyze a scenario. Shopping Center In the Shopping Center, the mother realized her child had been kidnapped so she called the police. The FAO arrived and would have asked the mother about her child, description, age etc. they would have also asked about the abductor. What time they had taken James and if she had seen anything that might be useful. The FAO would secure the shopping center, looking for anybody suspicious and checked everybody entering / exiting the center. They would also reassure the mother. Officers searched the shopping center and outside area for the young boy. No evidence was found in the shopping center and to no surprise as it is a busy place and no clue could definitely link to the abductor. Officers went to the security department asking to see CCTV. ...read more.

His underwear was heavily soaked in blood. Nearby was a heavy iron bar and rocks also covered in blood. Results of forensic tests on traces of blood and paint found beside James' body on the railway track were presented to the jury in the prosecution. The role of the SOCO is to link physical evidence to a potential suspect. Mr. Jackson, a Scenes of Crime Office, described a possible sequence of events deduced from the evidence. He claims Humbrol blue paint was spilt over James. James was hit causing a splattering of blood. At least one brick was used to inflict injuries to his head. The child was moved across the tracks, where bricks were placed deliberately around his body. Speaking to witness' and using evidence surrounding the body, investigators pieced together the puzzle and chain of events leading to the murder. Although the evidence at the Railway Tracks showed how James Bulger was killed, no evidence was found that could be individualized to the murderer. A bruise on James' right cheek was found with the feature of the upper part of a shoe, with an unusual arrangement of lacing rings. Evidence on the Suspects An anonymous woman called the police station, reporting her friends son, Jon Venables, had skipped school that day and resembled the boy in the CCTV footage. ...read more.