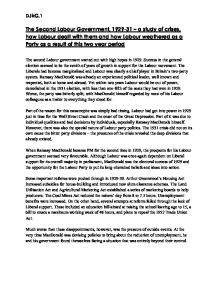 Crises of the Second Labour Govt.

The Second Labour Government, 1929-31 - a study of crises, how Labour dealt with them and how Labour weathered as a Party as a result of this two year period The second Labour government started out with high hopes in 1929. Success in the general election seemed to be the zenith of years of growth in support for the Labour movement. The Liberals had become marginalised and Labour was clearly a chief player in Britain's two-party system. Ramsay MacDonald was already an experienced political leader, well known and respected, both at home and abroad. Yet within two years Labour would be out of power, demolished in the 1931 election, with less than one-fifth of the seats they had won in 1929. Worse, the party was bitterly split, with MacDonald himself regarded by most of his Labour colleagues as a traitor to everything they stood for. Part of the reason for this catastrophe was simply bad timing. Labour had got into power in 1929 just in time for the Wall Street Crash and the onset of the Great Depression. ...read more.

Between the end of 1929 and 1931, the value of British exports fell by half. Unemployment, already over a million due to the long-term structural decline of the staple industries, rose until it was around 2.5 million by the end of 1931 and almost 3 million by the end of 1932. Industries like coal and shipbuilding were especially affected. The escalating unemployment figures posted a serious dilemma to the new government. MacDonald was no economist and really had little idea of how to tackle unemployment. In 1930, he set up the Economic Advisory Council of industrialists and economists to provide advice, but he remained wary of 'new' ideas. More unemployment meant more unemployment benefits to be paid out and this put a great strain on government finances. Since the Labour Party stood for the welfare of the working man, the provision of benefits was integral to its beliefs. Yet, allowing huge sums of money to disappear in benefits not only undermined MacDonald's traditional belief in a 'balanced budget', it also appeared irresponsible at a time when the party desperately wanted to be viewed as capable and trustworthy. ...read more.

As Britain was on the Gold Standard, they withdrew their money in gold, threatening the bank's reserves. The Liberals proposed a committee to consider how government might curb its expenditure and so restore confidence and MacDonald duly appointed the May Committee, chaired by Sir. George May the secretary of Prudential Insurers, to make recommendations. The May Committee's report was published on 31 July 1931. It came as an unwelcome bombshell to the troubled government. It predicted a massive budget deficit of �120 million by 1932 unless severe cuts were made in government spending. It recommended cuts amounting to �96.5 million with pay cuts for public sector employees, such as teachers, policemen and civil servants and a 20 per cent cut in unemployment benefit and heavier taxation. Interestingly, the two Labour members of the Committee did not agree with these proposals and produced their own 'minority report', but their views were ignored. The report deepened the financial crisis still further by drawing attention to Britain's alleged problems. Nearly a quarter of Britain's gold reserves disappeared and in mid-August ministers, who had left for their holidays after the report's publication, were recalled for emergency meetings to try to resolve the crisis! ?? ?? ?? ?? DJkG.1 ...read more.