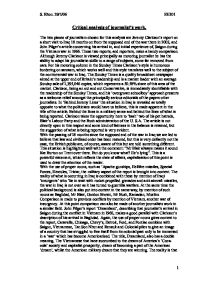 Critical analysis of journalist's work. The two pieces of journalism chosen for this analysis are Jeremy Clarkson's report on a short visit to Iraq 18 months on from the supposed end of the war there in 2003, and John Pilger's article concerning his arrival in, and initial experience of, Saigon during the Vietnam war in 1966. These two reports, and reporters, make a handy comparison. Although Jeremy Clarkson is viewed principally as motoring journalist he has the ability to adapt his journalistic skills to a range of subjects, some far removed from cars. For his motoring column in the Sunday Times Clarkson's style is humorous bordering on sarcasm, which works well and this style translates well to the subject of the controversial war in Iraq. The Sunday Times is a quality broadsheet newspaper aimed at the upper end of Britain's readership and is a market leader with an average Sunday sale of 1,395,046 copies, which represents a 50.58% share of this area of the market. Clarkson, being an out and out Conservative, is immediately identifiable with the readership of the Sunday Times, and his 'overgrown schoolboy' approach presents as a welcome relief amongst the principally serious editorials of the papers other journalists. ...read more.

At the same time the political background is also put into context in the same way, by mention of such nouns as Baghdad, Mr Blair, Gordon Brown, Mr Bush, Ramadan, Muslim. Comparison is made to previous conflicts by mention of Vietnam, another war of insurgency. At this point comparison can also be made of another journalists work in a similar field. John Pilger's report 'Dreamland', describing that journalist's arrival in Saigon during the conflict in Vietnam in 1966, makes a good parallel with Clarkson's description of his arrival in Baghdad. Again, the use of proper nouns gives context to the report, Caravelle, Chicago, Chevy's, Detroit, Ford, and Pontiac combine with Saigon, Vietnamese, Tan Son Nhut and Renault and Colonial piles to give an image of a country that has struggled to free itself from its colonial past only to be immersed in a 'war' which has become Americanised. The title, Dreamland, also has a double meaning. The Vietnamese that have succumbed to the dream of America's 'Coca-cola' society and capitalist prosperity, dream of becoming a part of the American 'dream', whilst the American military dream that they are winning. ...read more.

Compare these with Pilger's arrival in Saigon's "metallic jungle" in the "flaking Caravelle" to an airport outside of which "fat Fords" with their Vietnamese drivers barely visible and the two very different styles of journalism can be seen to follow at least some of the same formula. Both conflicts were dominated by American involvement; this is most evident in Vietnam but perhaps not so obvious with Iraq. Perhaps to emphasise this point Clarkson's report is, as previously mentioned, littered with connotations to America, a lot of which derogatory in response to the understanding that the United Kingdom was dragged into involvement in Iraq by the U.S., this is substantiated by such statements as: "Knuckle-dragging one eyed swamp-man from Buttsville, Iowa" or "Turbine powered gas (Americanisation of the word fuel) hogs" as well as the more obvious references to things that are immediately identifiable with America, items, such as Coca-cola or Marlboro reds. Attention is also drawn to the poor state of the military equipment or the quality of the personnel with comments such as: "...the tannoy system had obviously been salvaged from one of the railway stations Beeching closed down in 1963" and "...an adenoidal teenager" who "...said I didn't have a pass, and then failed to do anything about it". ...read more.