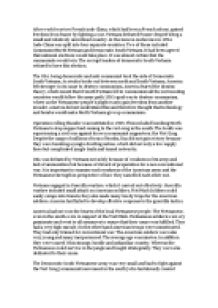 Critical analysis of why America Lost the Vietnam War

Transfer-Encoding: chunked ﻿After world war two French indo-China, which had been a French colony, gained freedom from france by fighting a war. Vietnam defeated France despite being a small and relatively uncivilised country. At the Geneva conference in 1954 Indo-China was split into four separate countries. Two of these included Communist North Vietnam and Democratic South Vietnam. It had been agreed that national elections would take place. It was almost certain that the communists would win. The corrupt leaders of democratic South Vietnam refused to have this election. The USA, being democratic and anti-communist took the side of Democratic South Vietnam. As rivalry broke out between north and South Vietnam, America felt stronger in its cause to destroy communism. America feared the domino theory, which meant that if South Vietnam fell to communism all the surrounding countries would follow the same path. ...read more.

Vietnam engaged in Guerrilla warfare, which it carried out effectively. Guerrilla warfare included small attack on American soldiers. Viet Minh Soldiers could easily escape into tinnels, they also made many booby traps for the American soldiers. America had failed to develop effective response to the guerrilla tactics. America had not won the hearts of the local Vietnamese people. The Vietnamese, even in the south, were in support of the Viet Minh. Vietnamese soldiers were ery passionate and went to all measures to ensure that their cause was fulfilled; They had a very high morale. On the other hand American troops were unmotivated. They had only trained for conventional war. The American soldiers were also very young and many inexperienced. The average age was ninetee, In addition they were scared I this strange, hostile and unfamiliar country. Whereas the Vietnamese could survive in the jungle and fought strategically. They were also dedicated to their cause. ...read more.

America began revolutionising their tactics and included chemical warfare. America used exfoliants, Agent Orange and napalm. These chemicals were against the law put down by the Geneva conference. This was the first televised war and the American civilians could see the atrocities being committed, especially as a result of chemical warfare. America lost support of its citizens as it became clear that they could not win the war. American families of soldiers were also against the war. Peoples opposition was often inspired on the basis that innocent Vietnamese civilians were being killed by slow cruel methods. In conclusion we can say that Vietnam shows communism gained over America because it did not understand the goal of the Vietnamese people, the terrains and the guerrilla tactics. It is key to understand that the perseverance of the Vietnamese lead them to win through against America despite the high death rates of Vietnamese citizens. They were not discouraged by this but rather enraged and fought more fiercely. ...read more.