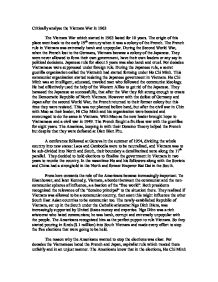 Critically analyse the Vietnam War in 1963

Critically analyse the Vietnam War in 1963 The Vietnam War which started in 1963 lasted for 10 years. The origin of this place went back to the early 19th century when it was a colony of the French. The French rule in Vietnam was extremely harsh and unpopular. During the Second World War, when the French lost to the Germans, Vietnam became a colony of the Japanese. They were never allowed to form their own government, have their own leaders or any say in political decisions. Japanese rule for about 5 years was also harsh and cruel. For decades Vietnamese were suppressed under foreign rule. During the Japanese rule, a secret guerilla organization called the Vietminh had started forming under Ho Chi Minh. This communist organization started resisting the Japanese government in Vietnam. Ho Chi Minh was an intelligent, educated, traveled man who followed the communist ideology. He had effectively used the help of the Western Allies to get rid of the Japanese. They harassed the Japanese so successfully, that after the War they felt strong enough to create the Democratic Republic of North Vietnam. However with the defeat of Germany and Japan after the second World War, the French returned to their former colony but this time they were resisted. ...read more.

Now that Johnson had this approval, he widened the conflict by bombing the North Vietnamese cities of Hanoi and Haiphong. They called it "Operation Rolling Thunder" in retaliation to the North Vietnam. Supply chains in South Vietnam leading to the North were cut and on the 8th March 1965 , 3500 marine troops came ashore on Da Nang and officially announced that Vietnam was in war with USA. When US troops landed in North Vietnam, the guerrilla fighters were outnumbered and outgunned, they were also not trained and were not good at open warfare. However Ho Chi Minh and the fighter did not give up. They soon started implementing their unique guerrilla tactics to wear down the Americans. The worked in small groups and used the forest to their advantage, to hide, and counter attack. They always attacked suddenly and took the Americans by surprise. They had limited weapons but used them efficiently. They had four simple rules to follow: -Retreat when enemy attacks (less casualties) -Raid when enemy camps (surprise attack) -Attack when enemy tires out -Pursue when enemy retreats These tactics were a nightmare for the Americans. On top the Guerrillas wore no uniforms and mixed so well with the peasants that it was difficult to differentiate between a guerrilla fighter and a peasant. ...read more.

It was a good opportunity for the US to accept their offer of friendship because Nixon knew how both could be used. He started putting pressure on China to ask North Vietnam to stop the war. With USSR Nixon started having talks of an arms reduction treaty (SALT). Finally in 1973 a cease fire and a peace treaty were agreed upon and rather unconvincingly presented the US people as a victory. As a result, US troops were to leave Vietnam in two months, prisoners were to be exchanged and a UN truce-supervision force was to monitor the new arrangement. It was only a short time before North Vietnam completely overran the South and the country was reunited under communist leadership. Bottom line, it was a communist victory. The after effects of the war were more. Thailand, Burma, Malaysia, and other neighboring states, did not fall to the Communists, contrary to the expectations raised by the domino theory. The American people felt entitled to know why vast resources had been spent, nearly 60,000 Americans had lost their lives and 150,000 servicemen wounded, in a war which had been fought to stop Vietnam turning Communist. In the eyes of many Americans it was the worst war in the US history. Involvement in the Vietnam War cost the US unfold damage in prestige and loss of influence overseas. ...read more.