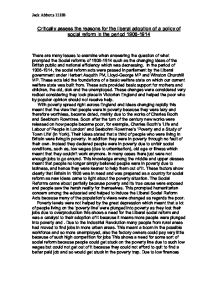 Critically assess the reasons for the liberal adoption of a policy of social reform in the period 1906-1914 There are many issues to examine when answering the question of what prompted the Social reforms of 1906-1914 such as the changing ideas of the British public and national efficiency which was decreasing. In the period of 1906-1914, the social reform acts were passed in parliament by the Liberal government under Herbert Asquith PM, Lloyd-George MP and Winston Churchill MP. These acts laid the foundations of a basic welfare state on which our current welfare state was built from. These acts provided basic support for mothers and children, the old, sick and the unemployed. These changes were considered very radical considering they took place in Victorian England and helped the poor who by popular opinion should not receive help. With poverty spread right across England and ideas changing rapidly this meant that the view that people were in poverty because they were lazy and therefore worthless, became dated, mainly due to the works of Charles Booth and Seebhom Rowntree. Soon after the turn of the century new works were released on how people became poor, for example, Charles Booth's 'Life and Labour of People in London' and Seebohm Rowntree's 'Poverty and a Study of Town Life' (in York). ...read more.

Due to low finances many men were unhealthy, a crucial point in the adoption of social reform came when men were called to fight in the Boer war but nearly 3/5 men had to be turned away because they were not fit enough to fight, this also meant that Britain had a weak workforce and this would not be sufficient if they wanted to keep themselves as an industrial superpower and keep making large amounts of profit therefore something like social reform was needed to be put in place. Social Reform was helped along by The Leaders of the Liberal Party, predominantly Lloyd-George and Winston Churchill; both showed a personal interest in social reform. Lloyd-George had a very non-conformist upbringing. He liked the new ideas on poverty and that a more balanced Britain would have brought in more money to the state. Having witnessed poverty he had a personal desire to amend it and he pressured the reform movement personally. Winston Churchill had an aristocratic rising, never the less he was also keen to eradicate poverty on a large scale, regardless of any political pressure. These two strong leaders who desired change for the good, helped Liberal Reforms to be passed, come to public light and for them to be put to the House of Commons. ...read more.

They wanted leaders who would identify with their needs and troubles and help them. In 1901 their membership was 350,000 and by 1903 it had risen to 861,000. This showed the Conservatives and the Liberals that the Labour party would have been a real threat if the working classes were allowed to vote or if general support gathered for their cause from all classes. This realisation of labour power led to the lib lab pact which benefited both parties and helped liberals to win the 1906 election. Therefore, social reform was necessary to counteract the development of the labour party, to try and show to the nation that they need not change party because the Liberal's were reforming to meet the changing demands in society. In conclusion, the Welfare Reforms came about because of changing ideology and the founding of the Labour party, which promised more action on the growing awareness of poverty and exclusion of the working classes from political representation. The reforms were helped along the way by changing Liberal ideas and compassionate concerned leaders, but it appears that any party who wanted to win the support from the electorate had to change their ideas to match the changing of the public's opinions . Jack Abbotts 12HB ...read more.