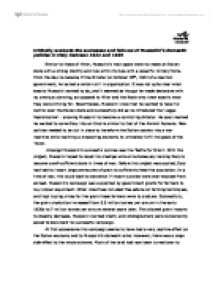 Tim Bell History HL 15/02/05 Critically evaluate the successes and failures of Mussolini's domestic policies in Italy between 1922 and 1939 Similar to those of Hitler, Mussolini's main goals were to create an Italian state with a strong identity and role within Europe with a powerful military force. From the day he became Prime Minister on October 29th, 1922 of a coalition government, he lacked a certain skill in organization. It was not quite clear what exactly Mussolini wanted to do, and it seemed as though he made decissions with no previous planning, as opposed to Hitler and the Nazis who knew exactly what they were striving for. Nevertheless, Mussolini knew that he wanted to have full control over the Italian state and successfully did as he introduced the 'Legge Fascistissime' - allowing Mussolini to become a controlling dictator. He soon realized he wanted to carve Italy into an Empire similar to that of the Ancient Romans. New policies needed to be put in place to transform the Italian society into a war machine while mainting a prospering economy to ultimately fulfill the goals of the 'Duce'. Amongst Mussolini's successful policies was the 'Battle for Grain'. With this project, Mussolini hoped to boost his prestige while simultaneously helping Italy to become a self-sufficient state in times of war. ...read more.

Ultimately, this project was to some extent a success, although not much land was reclaimed and given to farmers thus having only minor positive effects. In addition to these agricultural policies, Mussolini also had some reasonably successful economic policies. One of these was the introduction of a new organisation known as the Institute for Industrial Reconstruction (IRI). This organisation was implemented as a result of the worldwide economic depression in the early 1930s. This organisation's purpose was to take over the role of the banks and loan money to industries. It also promoted industrial technique and successfully managed to furthermore industrialize Italy. Although this scheme costed a fairly large increase to taxpayers, it helped Italy through the economic depression which many democratic countries were suffering from. USA, being one of the greatest sufferers from the economic depression, copied this type of policy when establishing America's 'New Deal'. Mussolini also took credit for electrifying 5,000km of railroad. He claimed it to be one of his greatest achievments and stated that all the trains now ran on time. In contrary of these economic and agricultural policies, Mussolini also encountered some failures within his policies. In a strive to increase Italy's population from 40 million to 60 million by 1950, Mussolini launched the 'Battle for Births' in 1927. ...read more.

Perhaps it is fair to say that the biggest success was the introduction of the IRI as it helped to industrialize Italy, yet the scale of this success was not close to that of his failures. Wanting to create a population of 60 million in 1950 was amongst the biggest failures of his domestic policies. Though it must be said that many of Mussolini's policies, which were regarded as failures to the public, were successful in his own eyes. His goal of gaining prestige by reevaluating the lire was achieved, thus one could say that this was a successful policy. However, this policy was not successful in the respect of Italy as a whole. To conclude, if we look back at Mussolini's primary and main aim - to create an Italian state which resembles the Ancient Roman Empires power and role in Europe, and one that is self-sufficient in a time of war, I think it is safe to say the the Duce greatly failed to achieve this. At the time the war broke out, Italy was not near the state of being self-sufficient. As Mussolini had hoped, Italy did not have a powerful military to boast about. All in all, Mussolini encountered some successes while overcoming his obstacles of his primary aims. I think it is fair to say that Mussolini failed as a leader to accomplish his ideal state. ...read more.