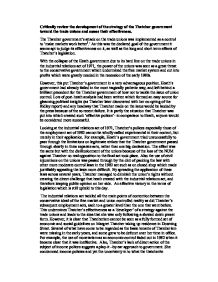 Critically review the development of the strategy of the Thatcher government toward the trade unions and assess their effectiveness. The Thatcher government's attack on the trade unions was implemented as a control to 'make markets work betteri.' As this was the declared goal of the government it seems apt to judge its effectiveness on it, as well as the long and short term effects of Thatcher's legislation. With the collapse of the Heath government due to its hard line on the trade unions in the industrial relations act of 1971, the power of the unions was seen as a great threat to the conservative government which undermined the free market system and cut into profits which were greatly needed in the recession of the early 1980s. However, this put Thatcher's government in a very advantageous position. Heath's government had already failed in the most tragically pathetic way, and left behind a brilliant precedent for the Thatcher government of how not to tackle the issue of union control. Lots of post-heath analysis had been written which formed an easy source for gleaming political insights (as Thatcher later discovered with her co-opting of the Ridley report) and any headway that Thatcher made on the issue would be lauded by the press because of the so recent failure. It is partly the situation that Thatcher was put into which created such 'effective polices'- in comparison to Heath, anyone would be considered more successful. Looking at the industrial relations act of 1971, Thatcher's polices especially those of the employment act of 1982 cannot be wholly called experimental in their content, but merely in their application. ...read more.

The spread of workers across the country, each county dealing with its own syndicated issues as well as being far re moved from the issues of the movement as a whole (especially Scotland) and notably far away from the political hub centre of the uk. The steel workers strike of 1981 was used by the Thatcher government as precursor to the inevitable NUM strike. They worked in the ideas of the social security act as a controlling force and learnt ways they could improve control like forcing secret ballots before any industrial action, and making injunctions apply to entire unions. These bills were promptly passed through in the 1982 employment act. This was a very effective trial run and allowed Thatcher to see that the government was not ready to take on the NUM in 1981. The lack of stock piled coal and effective controls on the leadership of the unions needed to be resolved before the first confrontation. As the Ridley report states, the government should always choose the "field of battleiii" and Thatcher followed this while augmenting it with her own pragmatic politics which allowed for tactical retreat. Some of the Ridley plan was implemented early on in the process, once the target of the NUM had been chosen. The stock piling of coal and oil to avoid a repeat of the events in the 1974 strike began early in 1981- by reducing the supply and demand the damage on the general public would be lessen and there would be less public insistence to give in to the demands of the strikers. ...read more.

In short, the Thatcher government had it easier than most people believe because of the huge divides in their targets, the party's comparative history with dealing with unions and the lack of reasonable and representative leadership in the NUM. The Thatcher government not allowing the miners to spread their economic ideas until after the strike was another piece of well crafted effective control. In this period 75% of Britain's newspapers were owned by three men and the liberal smear campaigns they published against Scargill and the strikers helped to swash public opinion. The economic ideas would have appealed to those unsure about Thatcher's free market campaign and would on becoming wide spread have undermined support for the government, because the idea were just, even if the means were not. In conclusion, the backbone of the unions was broken with the num in 1985 that represented an iconic power humbled by Thatcher. Although this is partly down to the great employment of the Ridley plan and timely legislation, that merely end the strike. The loss of power and resolve in the trade union movement came from Thatcher's control of the media, painting the trade unionists as the 'enemy within' and lucky breaks due the weakness and radicalism of her opponents who didn't correctly represent the opinions and needs of the striking workers. i John MacInnes, Thatcherism at work, pp.53 ii Chris Wrigley, British trade unions since 1933, pp.46 iii Nicholas Ridley, The Ridley plan, pp. 10. iv Nicholas Ridley, the Ridley plan, pp.22 v John Macinnes, Thatcherism at work, pp. 55 vi Anthony King, British Political Opinion 1937-2000: The Gallup Polls. Pp.337 ?? ?? ?? ?? ...read more.