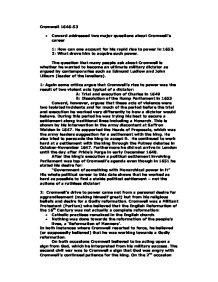 Cromwell 1646-53 * Coward addressed two major questions about Cromwell's career 1: How can one account for his rapid rise to power in 1653. 2: What drove him to acquire such power. The question that many people ask about Cromwell is whether he wanted to become an ultimate military dictator as argued by contemporaries such as Edmund Ludlow and John Lilburn (leader of the levellers). 1: Again some critics argue that Cromwell's rise to power was the result of two violent acts typical of a dictator: A: Trial and execution of Charles in 1649 B: Dissolution of the Rump Parliament in 1653 Coward, however, argues that these acts of violence were two isolated incidents and for much of the period before the trial and execution he worked very differently to how a dictator would behave. ...read more.

Furthermore he did not arrive in London until the day after Pride's Purge in early December 1648. After the king's execution a political settlement involving Parliament was top of Cromwell's agenda even though in 1651 he stated his desire for: "Government of something with Monarchical power in it" His whole political career to this date shows that he worked as hard as possible to find a stable political settlement - not the actions of a ruthless dictator! 2: Cromwell's drive to power came not from a personal desire for aggrandisement (making himself great) but from his religious beliefs and desire for a Godly reformation. Cromwell was a Militant Protestant (Puritan) who believed that the English Reformation of the 16th Century was not actually a complete reformation: * Catholic practises remained in the English church. ...read more.

On the 2nd occasion Cromwell's zeal for Godly reformation was boosted by his military campaigns in Scotland and Ireland. God's help in battle had to be repaid by a Godly Reformation, which Cromwell desperately wanted. The Rump however, did not share this desire and only wanted to perpetuate their own power. The incident of April 20th 1653 was the final straw for Cromwell driving him to violence. Cromwell, therefore, genuinely tried to follow the twin aims of: * A political settlement (constitutional) * Godly reformation When the latter was threatened by the former he was prepared to resort to military action. Coward believes that Cromwell was completely sincere in his views, only wanting power to achieve his ambition for a Godly Reformation and it is this that explains his occasional resorting to violence. It was this however, that fuelled the accusations of him being a ruthless military dictator. ...read more.