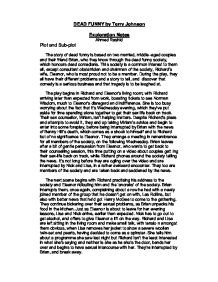 DEAD FUNNY by Terry Johnson Exploration Notes Ahmed Rashid Plot and Sub-plot The story of dead funny is based on two married, middle-aged couples and their friend Brian, who they know through the dead funny society, which honours dead comedians. This society is a common interest to them all, except consultant obstetrician and chairman of the society, Richard's wife, Eleanor, who is most proud not to be a member. During the play, they all have their different problems and a story to tell, and discover that comedy is a serious business and that tragedy is to be laughed at. The play begins in Richard and Eleanor's living room; with Richard arriving later than expected from work, boasting tickets to see Norman Wisdom, much to Eleanor's disregard and indifference. She is too busy worrying about the fact that it's Wednesday evening, which they've put aside for time spending alone together to get their sex life back on track. ...read more.

Richard and Lisa are left sitting in the living room and make small talk, with tension amongst them obvious, when Lisa removes her jacket to show a severe woollen twin-set and pearls, having decided to come as a spinster. She tells him about a programme she saw last night but Richard isn't the least interested in what she's saying and neither is she as he shuts the door, bends her over and begins to have sexual intercourse with her. They're interrupted by Brian, and break away. At the start of Act two, Brian is left to hear the meagre attempts of excuses from Lisa and Richard and assures them that their secret is safe with him. Richard leaves and Brian talks with Lisa about her telepathic powers and whether she's ever tried to contact dead comedians. Nick enters, dressed as Mr Chow Mein character and they all perform parts of Benny Hill sketches, during which Eleanor returns. These continue until they've all told a joke, including Eleanor, after being accused of having no sense of humour. ...read more.

After a pause, Lisa goes to collect the baby and after much apologising, she leaves with a disgruntled but surprisingly tranquil, nick. When they leave, Eleanor tells Richard that she knows the baby is his and that he can sleep with her or leave tonight. Brian offers to let him stay and Richard leaves to collect his things. Brian comforts Eleanor over her fears of ending up alone and Richard returns with his things. Eleanor, having realised how lonely she would be asks him to stay, but he contends that he might as well go, as he had already packed and exits again. The weakness of this excuse not to stay is very powerful, as it shows his underlying tensions throughout the play. Brian tries to make Eleanor feel better and even touches her breast to let her know she's still attractive, but the play ends with them singing, and who else but Frankie Howard. Brian's closing comment that "You've got to see the funny side of it", again shows an underlying theme in the play that indeed, comedy is serious and that tragedy is to be laughed at. ...read more.