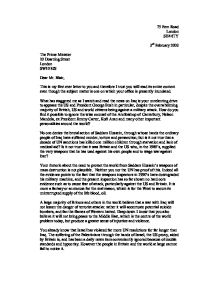 75 Fern Road London SE4 8TY 3rd February 2003 The Prime Minister 10 Downing Street London SW10 8JS Dear Mr. Blair, This is my first ever letter to you and therefore I trust you will read its entire content even though the subject matter is one on which your office is presently inundated. What has staggered me as I watch and read the news on Iraq is your unrelenting drive to appease the US and President George Bush in particular, despite the overwhelming majority of British, US and world citizens being against a military attack. How do you find it possible to ignore the wise counsel of the Archbishop of Canterbury, Nelson Mandela, ex President Jimmy Carter, Kofi Anan and many other important personalities around the world? ...read more.

It is more a fantasy or an excuse for the real reason, which is for the West to secure its uninterrupted supply of the life blood, oil. A large majority of Britons and others in the world believe that a war with Iraq will not lessen the danger of terrorist attacks: rather it will accentuate potential suicide bombers, and fan the flames of Western hatred. Deep down I know that you also believe it will not bring peace to the Middle East, which is the centre of the world problem today, but produce a greater sense of injustice and violence. You already know that Israel has violated far more UN resolutions for far longer than Iraq. The suffering of the Palestinians through the hands of Israel, the US proxy, aided by Britain is, and has been a daily news item conveniently ignored because of double standards and hypocrisy. ...read more.

year; we see numerous world trouble spots for example The Democratic Republic of Congo, where two million five hundred thousand people died recently as a result of war fought over the country's rich resources; There are looming environmental disasters; India and Pakistan are at each others' throats with a nuclear holocaust in sight; North Korea, Israel, Russia, China and possibly others with large stockpiles of weapons in their armoury- the world is already shaking with fear. I believe that the likes of the US, Britain and Europe should be motivated to solving these threats rather than creating yet another avenue for instability, vengeance and hatred by attacking a nation that can barely afford to feed its own people. Therefore I appeal to your true conscience and hope that good sense will prevail for the sake of mankind, global peace and security. Yours faithfully, S.K. ...read more.