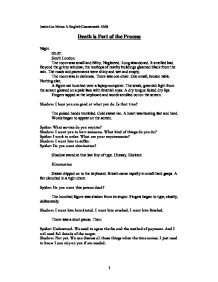 Death is Part of the Process

Justin Liu Maine A English Coursework AMS Death is Part of the Process Night. 02:37. South London. The room was small and filthy. Neglected. Long abandoned. It smelled bad. Beyond the grimy window, the rooftops of nearby buildings gleamed black from the rain. The roads and pavements were shiny and wet and empty. The room was in darkness. There was one chair. One small, broken table. Nothing else. A figure sat hunched over a laptop computer. The weak, greenish light from the screen glowed on a pale face with feverish eyes. A dry tongue licked dry lips. Fingers tapped at the keyboard and words scrolled out on the screen. Shadow: I hear you are good at what you do. Is that true? The poised hands trembled. Cold sweat ran. A heart was beating fast and hard. Words began to appear on the screen. Spider: What service do you require? Shadow: I want you to hurt someone. What kind of things do you do? Spider: I work to order. What are your requirements? Shadow: I want him to suffer. Spider: Do you want elimination? Shadow stared at that last line of type. Uneasy. Hesitant. Elimination Sweat dripped on to the keyboard. Breath came rapidly in small hard gasps. A fist clenched in a tight chest. Spider: Do you want this person dead? The hunched figure was shaken from its stupor. Fingers began to type, slowly, deliberately. Shadow: I want him humiliated. I want him crushed. I want him finished. There was a short pause. Then: Spider: Understood. We need to agree the fee and the method of payment. And I will need full details of the target. Shadow: Not yet. We can discuss all these things when the time comes. I just need to know I can rely on you if are needed. Shadow did not see the need to tell Spider everything at this stage. ...read more.

"There's no water or electricity in the flat, so I don't think that Shadow lives there. He's just been using it as a safe house- a place for his picture gallery, and somewhere private to make contact with Spider." He tapped the keyboard again and the disfigured faces on the monitors faded to grey. The lights came up. "OK," said Jack. "I think that as the Wimbledon final is coming up soon, we need to be there to make sure that nothing harms Will Anderson. Alex, I am going to ask you to meet Will Anderson and his trainer and keep watch on them and make sure nothing hurts him beforehand. The rest of us will start planning where we will be positioned at Centre Court for the final." "I've compiled some detailed notes on Will Anderson," said Maddie. "This is his background story. Listen. It says that Will Anderson lost his parents a few years ago because they died in a car crash and his older brother James took over as his coach and has been looking after Will ever since. You must not be too hard on them when you tell them what has happened Alex because of that and because it says here that James lost his eye in an accident when he and Will were younger." Alex read the sheet Maddie had just given him and he looked at the face of James Anderson. It was hard to tell that he was blind in one eye because an artificial eye had replaced it. "Thanks for the help Maddie," said Alex. "OK guys let's go," said Jack Cooper as he stood up and left the room. * A private tennis club in Roehampton. Two days before the Wimbledon final. Alex watched Will Anderson through a mesh of wire fencing. He wasn't a big tennis fan, but he knew enough to admire the range of shots Will used, and the speed with which the ball was fired back over the net by the young tennis star. ...read more.

"He's won. He's won," said James slowly in disbelief. "He won without me." He crumpled to his knees and started crying. "It's OK James," said Maddie. "Please call Spider off." And James pulled out his mobile phone reluctantly and punched in a text. * Will had somehow, without James, dredged up the spirit to fight back and beat Craig Tanner. Just when he had three Championship points against him, he miraculously turned the game around and finally knocking the spirit out of Tanner and winning Wimbledon. However, no-one noticed the tiny red dot pinpointed on the back of Will's shirt. Spider was ready. All he had do was wait for Will to turn around. He had been given specific instructions to shoot through the right eye. Tricky at a distance but not so tricky for a professional. Suddenly his mobile phone went off. He had received a text message. Still with his head cocked and one eye on Will Anderson, he opened it. EYES TIGHT SHUT Spider smiled ruefully and clucked his tongue. Slowly and methodically he took apart the sniper rifle and assembled them back in the silver case. He shut he door and left quietly. * New orders were coming in. Two security guards had been knocked out with blows to the head. A car had been hijacked. The man had made his escape. No PIC officer had even known that Spider had made his way into the building and left it until then. In the canteen room three exhausted PIC trainee officers sat down to drink coffee. "James was taken off in an ambulance," explained Maddie to Alex and Danny. "I'm not sure if Will even knows yet." "That guy is sure going to be in hospital for a very long time," remarked Danny. Just then Jack Cooper came over. "Well done guys. You did really well out there and I want to congratulate you all," he said. They all smiled. "You too Dad," said Maddie. "In fact we all did our bit today. It was teamwork. That's how we won- game, set and match." ?? ?? ?? ?? 1 ...read more.