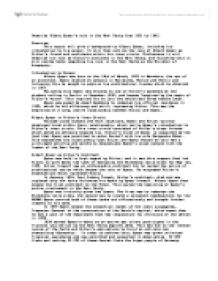 Describe Albert Speer's role in the Nazi Party from 1931 to 1945. Overview: This report will give a background to Albert Speer, including his introduction to his career. It will then outline the role of Albert Speer as Hitler's friend and confidante within his inner circle. Furthermore it will describe his role as Hitler's architect in the Nazi Party, and following this it will convey facts regarding his role in the Nazi Party as the Minister of Armaments. Introduction to Career Albert Speer was born on the 19th of March, 1905 in Mannheim, the son of an architect. Speer studied at schools in Karlsruhe, Munich and Berlin and following this he sought to acquire his architectural license which he obtained in 1927. Following this Speer was witness to one of Hitler's speeches at the student rallies in Berlin in December 1930, and became "captured by the magic of Hitler's voice". This inspired him to join the socialists three months later. Speer was asked by Josef Goebbels to redesign his official residence in 1932, which he did efficiency and skill, impressing Hitler. This was the beginning of a long, active relationship between Hitler and Speer. ...read more.

In order to achieve this, Speer was given unlimited financial assistance and was permitted and supported in demolishing 52 000 flats and renting 23 000 of these Jewish flats the Aryan people of Germany. In 1941 Speer was selected as a representative of the electoral district of Berlin West, thus increasing his decision making power within the Nazi Party. It was also in this year the deportation of Jewish people from Germany began. Speer conducted his architectural duties through the Fuher and his support, providing new premises for the Nazi Party, as Hitler's right hand man. Albert Speer as Minister of Armaments On the 7th of February, 1942, Fritz Todt, the Minister of Armaments, was killed in a plane crash and Speer was appointed by Hitler himself as the succeeding Minister. Under his new title, Speer was given "free reign" over his district with the goal of reorganising armaments productions. He immediately demanded the increase of armaments production and this was accomplished through the use of concentration camp labour. Speer had indirect control of the German economy and his dedication to war efforts was vast. As a result, armaments production had doubled by 1942 and continued to rise throughout Speer's control of this area of the economy. ...read more.

Historians learn from Speer's own evidence that Speer planned an assassination of Hitler in April, 1945, which failed. Speer was arrested after the conclusion of the war and was transferred to Nuremberg where he was to be held until a court trial. He was later charged and sent to the 'Berlin Spandau' for 20 years. Albert Speer's Role in the Nazi Party - Historiography Many historians argue that Speer was aware of the atrocities of the Nazi Party and followed Hitler's orders regardless of the repercussion of this. For example, Hugh R. Trevor argues that Speer "ignored the political implications of the regime and served with absolute loyalty the real criminal of the Nazi regime [Hitler]". This suggests an almost puppet-like role in the early years of Speer's service. Henry King, a prosecutor at Nuremberg states that "From 1942 to 1945 not only was he one of the men closest to Hitler, but he was also one who influenced Hitler's decisions...". King's statement shows that Speer's role was as Hitler's advisor. Conclusion: Throughout the period of 1931 - 1945 Albert Speer acted within the Nazi Party as Hitler's puppet - the man who carried out Hitler's ideas. He was also Hitler's personal architect and the Minister of Armaments and War Production where he was effectively controlling the German economy. ?? ?? ?? ?? Student Number: 12027850 Modern History: Albert Speer ...read more.