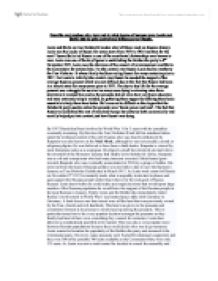 Describe and analyse why, how and to what degree of success were Lenin and Stalin able to gain control and influence over Russia.

Describe and analyse why, how and to what degree of success were Lenin and Stalin able to gain control and influence over Russia. Lenin and Stalin are two Bolshevik leaders who left there mark on Russian history. Lenin was the leader of Russia for seven years from 1917 to 1924 and then for the next 17years Stalin led Russia in one of the most brutal dictatorships ever known to man. Lenin was one of the key figures in establishing the Bolsheviks party in 8th November 1917. Lenin was the chairman of the council of commissioners and Stalin the Commissar for nationalities. To take control over Russia Lenin had to overthrow the Tsar Nicholas II whose family had been ruling Russia for many centuries prior to 1917. For Lenin to initially take control over Russia he needed the support of the average Russian peasant which was not difficult due to the fact that Russia had been in a chaotic state for many years prior to 1917. The day to day life for the average peasant was a struggle for survival as many were dying in alarming rates form starvation to malnutrition and as the peasants did not even have any basic education and were extremely simple minded, so gathering there support by offering them basic essentials to help them have ...read more.

The civil war however was disastrous for the population as many were killed and lost there land. 21million people died between 1914 and 1921. Only 50% of Russia's farming land was cultivated. Poor sanitation led to widespread disease. There major shortages in doctors and hospitals. In 1921 5 million people died of famine. To help Russia's economy Lenin started up the NEP (New Economic Policy). The NEP restored some private ownership to small parts of the economy, especially farming. It replaced the policy of "War Communism", which had been used during the Russian civil war and which was deemed unsustainable in an underdeveloped country like Russia, with a kind of "Market Socialism", whereby nationalized (government owned) industries were allowed to operate autonomously, while a market system was introduced in agriculture. To explain the NEP, Lenin had said "We are not civilized enough for socialism", referring to the fact that Russia was still a primarily agrarian nation, with a very small urban population and a weak industrial base, and thus it did not meet the economic criteria necessary for full socialism. NEP succeeded in creating an economic recovery after the devastating effects of the World War 1, the Russian Revolution and the Russian civil war. ...read more.

These called for a highly ambitious program of state-guided crash industrialization and the collectivization of agriculture. In spite of early breakdowns and failures, the first two Five-Year Plans achieved rapid industrialization from a very low economic base. The Soviet Union, generally ranked as the poorest nation in Europe in 1922, now industrialized at a phenomenal rate, far surpassing Germany's pace of industrialization in the 19th century and Japan's earlier in the 20th. With no seed capital, little foreign trade, and barely any modern industry to start with, Stalin's government financed industrialization by both restraining consumption on the part of ordinary Soviet citizens, to ensure capital went for re-investment into industry, and by ruthless extraction of wealth from the peasantry. In specific but common cases, the industrial labor was knowingly underpaid. First, there was the usage of the almost free labor of prisoners in forced labor camps. Second, there was frequent "mobilization" of communists and Komsomol members for various construction projects. In conclusion Stalin's rise to power was greatly successful economically and even for Stalin in personal terms as he got what he wanted a Russian state that he totally controlled with no objections however it is difficult to justify any success especially Stalin's when so many were killed under his orders and the majority were if not all were unnecessary. ...read more.