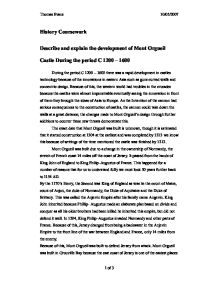 History Coursework Describe and explain the development of Mont Orgueil Castle During the period C 1200 - 1600 During the period C 1200 - 1600 there was a rapid development in castles technology because of the innovations in eastern Asia such as guns curved walls and concentric design. Because of this, the western world had troubles in the crusades because the castles were almost impenetrable eventually seeing the innovation in front of them they brought the ideas of Asia to Europe. As the Invention of the cannon had serious consequences to the construction of castles, the cannon could take down the walls at a great distance; the changes made to Mont Orgueil's design through further additions to counter these new threats demonstrate this. The exact date that Mont Orgueil was built is unknown, though it is estimated that it started construction at 1204 at the earliest and was completed by 1212 we know this because of writings of the time mentioned the castle was finished by 1212. Mont Orgueil was built due to a change in the ownership of Normandy, the stretch of French coast 14 miles off the coast of Jersey. ...read more.

It could easily see the French and any possible attacks. Its position is also close to French towns such as Cherbourg. Mont Orgueil is a concentric castle. Originally, it had two layers, but a third lower layer was built later. The castle design changed over the centuries to keep pace with advances in technology. It built an extra ward the Lower Ward, to increase the castle size and population capacity as well as to make it easier to defend - the enemy would have to capture more wards to reach the keep whilst being easy pickings as it turned into a killing zone. Additions were constantly added to Mont Orgueil over the centuries to keep it up to date with new weaponry and prevent it being easily defeated and captured. For instance, the Cornish Bastion had machiolations built in it so that cannon could fire down onto the Lower Ward from the Middle War although this wasn't used because it was to unstable. In England, the period between 1455 and 1485 was known as the War of the Roses. This war was between the Lancastrians the Red Rose, The Yorkists the White Rose. ...read more.

Between 1450 and 1600, artillery developed so much that the Somerset Tower although it is actually a wall, in the Middle Ward was built. It is partly a cannon defence - it is 20ft thick in places, so would have been hard to break down. The Grand Bastion is solely a defence against cannon. It is a mound of earth 20-30 ft wide and 50-60 ft high. It was covered with rocks to prevent it being worn away to quickly. The keep is the last line of defence, where the noblemen would stay in time of trouble. It is the hardest part of the castle to get to, as to reach it you need to go through the two lower wards. The ancient keep was extended to increase its size to house en suite facilities. Between the period C1200 - 1600 Mont Orgueil Castle had additions made to it continually to keep it up to date with modern weaponry. In spite of all the additions and developments, Mont Orgueil was deemed ineffective at its primary role - defence. Due to this, a new castle was built - Isabella Belisimo, later renamed Elizabeth Castle. Nothing has replaced the castles of the Middle Ages, as weaponry has advanced to the point where defence is almost pointless as it can usually be breached. Thomas Evans 10/05/2007 1 of 3 ...read more.