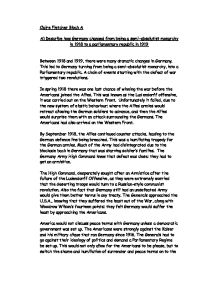 Describe how Germany changed from being a semi-absolutist monarchy in 1918 to a parliamentary republic in 1919.

Claire Fletcher Block A A) Describe how Germany changed from being a semi-absolutist monarchy in 1918 to a parliamentary republic in 1919 Between 1918 and 1919, there were many dramatic changes in Germany. This led to Germany turning from being a semi-absolutist monarchy, into a Parliamentary republic. A chain of events starting with the defeat of war triggered two revolutions. In spring 1918 there was one last chance of winning the war before the Americans joined the Allies. This was known as the Ludendorff offensive, it was carried out on the Western Front. Unfortunately it failed, due to the new system of elastic behaviour; where the Allies armies would retreat allowing the German soldiers to advance, and then the Allies would surprise them with an attack surrounding the Germans. The Americans had also arrived on the Western Front. By September 1918, the Allies continued counter attacks, leading to the German defence line being breached. This was a humiliating tragedy for the German armies. Much of the Army had disintegrated due to the blockade back in Germany that was starving soldier's families. The Germany Army High Command knew that defeat was close; they had to get an armistice. The High Command, desperately sought after an Armistice after the failure of the Ludendorff Offensive, as they were extremely worried that the deserting troops would turn to a Russian-style communist revolution. ...read more.

Then along with the discontent and demands of the Americans, a Republic had to be set up where the Kaiser had no say. In just the space of one year major event changed the course of Germany's ruling. Claire Fletcher Block A B) Explain why the prospects for the survival of the new democratic regime were not great Germany's new government found it hard to survive. There were a variety of different problems facing the Weimar Republic during its first years ruling: firstly it was only the results of a defeat in the first world war, there was the 'Stab in the back theory', the Ebert Groener pact, the communist uprisings, and the flaws in the constitution harmed its chance of survival. One of the most difficult tasks of the Weimar Government was the fact that they had to deal with the shame and humiliation of defeat. The Weimar government is often described as being 'born out of Defeat'. The only reason it was created was due to the fact that Germany lost the War, and the Allies would not negotiate terms unless a democratic government was put in place. The Republic was declared so closely to Germanys surrender, the Republic been declared on the 9th November 1918 and the armistice was signed on the 11th. ...read more.

The constitution had flaws that made the survival of the new government harder. On the one hand it was described as one of the most democratic governments of the time, yet it was not certain that it was possible for a new governing system to be able to cope with this. The constitution outlined that everyone would be able to vote using proportional representation. This led to many coalitions governments, twenty in fourteen years. The coalition governments argue a lot, and were slow to act, unlike the dictatorship that the German public were used to. Article 48 was also a danger to the continuance of the Weimar republic. This article stated that if an event was to happen that the President would deem to endanger public safety or order, they could take measures and not have to go through the Reichstag. This was dangerous as if the wrong person got in power they could become a dictator, as Hitler did. The prospects for survival of the new government were not great. They faced many major problems that were not their fault; being born out of defeat, and the 'stab in the back' theory. However, mistakes were made the Ebert and Groener Pact was dangerous as the army did go against the government as soon as a right wing uprising occurred, as well as this the constitution harmed the survival of democracy in Germany. ...read more.