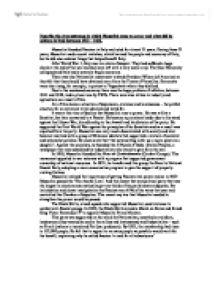 Describe the circumstances in which Mussolini came to power and what did he achieve in Italy between 1922 - 1935.

Describe the circumstances in which Mussolini came to power and what did he achieve in Italy between 1922 - 1935. Mussolini founded Fascism in Italy and ruled for almost 21 years. During these 21 years, Mussolini made crucial mistakes, which harmed the people and economy of Italy, but he did also achieve things that helped benefit Italy. After World War 1, Italy was in a state of despair. They had suffered a huge shock at the end of the war and had were left with a very weak army. The Dual Monarchy collapsed and Italy had a severely fragile economy. There was also Nationalist resentment towards President Wilson (of America) as they felt that they should have obtained more from the Treaty of Versailles. Extremists were also rising, for example, in protest to Yugoslavia whom they disliked. Due to the weakened economy there was the huge problem of inflation, between 1914 and 1918, index prices rose by 250%. There were also strikes in industry and agriculture as a result of this. All of this shows a situation of depression, violence and lawlessness - the perfect situation for an extremist to be admired and voted for. ...read more.

and Industrialists - such as Pirreli (makers in tyres) and Fiat (car producers). By 1921, the membership had risen to 152,000 people. He felt that to appeal to as many people as possible would work for his benefit, explaining why he called fascism 'a road for all adventurers' In 1925, Mussolini declared a dictatorship by removing any power that could be held in order to form a constitution. He abolished other political parties and imposed government control on industry, schools, press and police. He later called himself Il Duce (the Leader). Once in total control, Mussolini began to exercise his totalitarian rule. Although in many ways he failed to make Italy a stronger nation, he did improve it through a number of domestic policies. Mussolini used his strength and energy to get through to the people and soon the strikes had vanished and production started to pick up once again. Mussolini felt that by banning other political parties January 1925, he would have total control. Mussolini banned all political parties by law. Communists were arrested and there was censorship of Italian newspapers. It was now very difficult to oppose Mussolini's power in Italy. ...read more.

There was also an improvement in road and rail communications (and this made excellent propaganda material). Mussolini's drive for self-sufficiency or "autarky" in grain production was intended to improve Italy's position in trade as compared to the rest of Europe and North America. Mussolini introduced a campaign baptized the 'Battle for Grain' in order to increase grain production. The purpose of these 'Battles' was to make Italy self-sufficient so that its rising population could be fed in times of war. As a result there was an increase in home-grown wheat of 30%. Several hundred thousand acres of marshland was reclaimed for fields on housing projects. But there were some cutbacks, now, due to the increase of self-sufficient wheat production, grains imports could be cut, which was a benefit, but the Italians were paying 50%more for their wheat than the Americans paid for theirs. And so, in conclusion, it can be said that Mussolini got to power through means of force and the effective removal of any opposition. But, once in power, it can be said that he did more harm than good and as a result, Italy was rather unprepared when World War 2 hit. But it should be remembered that he did improve the living standards of the people (better communications and a widespread electricity supply) and improved the agricultural production. ...read more.