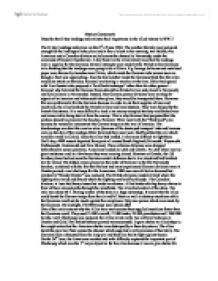 Describe the D-day landings and evaluate their importance in the allied victory in WW2.

History Coursework Describe the D-day landings and evaluate their importance in the allied victory in WW 2 The D-Day landings took place on the 6th of June 1944. The weather that day was just good enough for the landings to take place and at four o'clock in the morning, two British, two American and a Canadian division sailed across the channel to Normandy, under the command of General Eisenhower. A key factor in the allied victory was that the landings were a surprise for the Germans. Several attempts were made by the British to fool Germans in to thinking that the landings were going to be at Calais. E.g. barrage balloons and metalised paper were thrown by launches near Calais, which made the German radar screen seem as though a fleet was approaching. Also the bad weather made the Germans think that the allies would not attack on that day. Rommel was having a vacation at the time. Hitler had agreed with Von Runstet who proposed a "hold back technique" rather than his other general - Rommel who believed the German forces should be divided in two and placed in Normandy and Calais (more in Normandy). Instead, four German panzer divisions were waiting for signals of an invasion and when such takes place, they would be transported there. ...read more.

60 000 Germans were captured or killed. The allies pushed towards Seine and Paris was liberated. The Americans and French who had landed near Toulon linked with Patton's troops. German strength in France had collapsed. The main reason why the Second World War was won by the allies was that Hitler fought on more than one front. The D-day landings opened up a western front. It stretched the German army in two. That is why they had such a huge significance in the allied victory. The allies' defeat at Normandy meant that German strength in France had collapsed. This made Germany wide open for invasion. This invasion followed on the winter 1944-1945. D-day was the outcome of months and years of fighting and preparations. It was the decisive move of the allies, which occupied Germany and tried to match the Russian advance form the east. The D-day invasion of France did not change the outcome of the war because Germany was already losing it. It marked a "long awaited beginning of the last chapter of the war". There were other reasons, which contributed to the allied victory. The British victory in the Battle of Britain was very crucial. After Hitler had occupied France in a Blitzkrieg, Hitler tried to end any problems in the West by invading the Britain. ...read more.

This meant that the Germans had to fight on three fronts. If the Germans had defeated the Western front, the Germans would have concentrated their army on Russia. It is possible that this would have caused a Russian defeat but it is most likely that the Russians would have been able to still defeat Germany from the east. I have come to this conclusion because at the time Russia had twice escaped German attacks, had won in Kursk and was advancing in to Germany. If Russia had alone defeated Germany, she would most likely go in to France and the whole Europe would turn communist (That is one of the reasons USA, Britain and Canada hurried to make the D-Day landings). It would still however mean that it was an allied victory because Russia was part of the allies. If on the other hand Russia had been invaded earlier on and Moscow and Stalin grad and the oil fields were taken, the Germans would have had a good oils supply and high morale. It would mean Germany's whole army could concentrate in the west. It is more likely that the western front would have been lost because of the difficulty of making landings in enemy territory. This makes Russia the most important factor in the allied victory. However all these factors combined together ensured the allied victory, which would have been more difficult to achieve if any one factor was absent. ...read more.