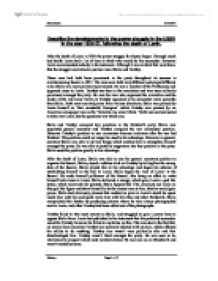 Describe the developments in the power struggle in the USSR in the year 1924-27, following the death of Lenin.

Describe the developments in the power struggle in the USSR in the year 1924-27, following the death of Lenin. After the death of Lenin in 1924 the power struggle for Russia began. Through much bad health Lenin had a lot of time to think who would be his succeeder. However Lenin recommended nobody in his testament. Although it was evident that most knew that the struggle was between just two men. Stalin and Trotsky. These men had both been prominent in the party throughout its success in revolutionising Russia in 1917. The men were both very different and played different roles. Stalin was more politically prominent. He was a member of the Politbureau and appeared close to Lenin. Trotsky was key in the revolution and was very militarily prominent amongst the party. He was the man who organised the revolution and the leader of the red army. Early on Trotsky appeared to be somewhat more powerful than Stalin. ...read more.

Stalin had obviously planned this method as prior to Lenin's death he spent much time with him and spent more time with him than any other Bolshevik. Stalin manipulated this further by producing pictures where he was always photographed next to Lenin, and often Trotsky had been edited out of the photographs. Trotsky failed to take such actions as Stalin, and struggled to gain a power base to oppose Stalin from. Lenin had published in his testament that his preferred succeeder would be Trotsky, however he failed to capitalise on this. This was due to the fact that on several key occasions Trotsky was severely infected with malaria, which affected his ability to do anything. Trotsky also wasn't very politically able and this disadvantaged him. Trotsky wasn't liked amongst the party. He was seen to be intellectually arrogant which most members hated. He was also an ex-Menshevik and wasn't trusted by some. ...read more.

Following this Trotsky began to criticise Kamenev and Zinoviev as 'October Deserters'. This provoked Stalin to invent 'Trotskyism' which portrayed Trotsky negatively. His unpopular ideas were fitted under this title such as rapid industrialisation, permanent revolution and his Menshevik traits. Trotsky was finished and dropped out of sight playing a minor role in Government. Following this Stalin turned on his allies Kamenev and Zinoviev for agreeing with Trotsky's ideas that the NEP should have been rejected. He used his control of the press to exploit that they believed in Trotskyism. At the 14th Party Congress Stalin won with a large majority. Trotsky now allied with Zinoviev and Kamenev attempted one last attack on Stalin stating that he was 'gravedigging the revolution.' However just as Stalin was being pushed, Zinoviev and Kamenev fell apart in the party and lost any power. Trotsky had no other support and was forced to back down. Following this Trotsky was expelled from the party. He was also exiled from Russia. Stalin now had total power. ?? ?? ?? ?? Sam James 05/10/07 History Page 1 of 2 ...read more.