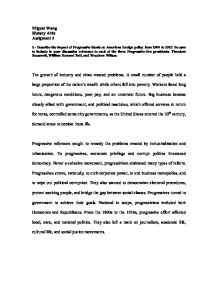 Describe the impact of Progressive ideals on American foreign policy from 1900 to 1917. Be sure to include in your discussion reference to each of the three Progressive-Era presidents- Theodore Roosevelt, William Howard Taft, and Woodrow Wilson.

Miguel Wong History 418x Assigment 2 1.- Describe the impact of Progressive ideals on American foreign policy from 1900 to 1917. Be sure to include in your discussion reference to each of the three Progressive-Era presidents- Theodore Roosevelt, William Howard Taft, and Woodrow Wilson. The growth of industry and cities created problems. A small number of people held a large proportion of the nation's wealth while others fell into poverty. Workers faced long hours, dangerous conditions, poor pay, and an uncertain future. Big business became closely allied with government, and political machines, which offered services in return for votes, controlled some city governments, as the United States entered the 20th century, demand arose to combat these ills. Progressive reformers sought to remedy the problems created by industrialization and urbanization. To progressives, economic privilege and corrupt politics threatened democracy. Never a cohesive movement, progressivism embraced many types of reform. Progressives strove, variously, to curb corporate power, to end business monopolies, and to wipe out political corruption. They also wanted to democratize electoral procedures, protect working people, and bridge the gap between social classes. Progressives turned to government to achieve their goals. National in scope, progressivism included both Democrats and Republicans. From the 1890s to the 1910s, progressive effort affected local, state, and national politics. They also left a mark on journalism, academic life, cultural life, and social justice movements. Meanwhile, in September 1901, an anarchist shot President McKinley, and Vice President Theodore Roosevelt assumed the presidency. ...read more.

In addition, U.S. troops occupied Haiti in 1915 and the Dominican Republic in 1916. American business interest continued to prevail in Latin America. Finally, Wilson came close to involving the United States in a war with Mexico. In 1913, two years after the Mexican Revolution, Mexico's new president was assassinated, and a reactionary general, Victoriano Huerta, took control. Wilson refused to recognize Huerta's unjust regime. Many Mexican who disliked Huerta, however, also resented Wilson's intervention in Mexican affairs. Both sides were poised to fight in 1914, when a confrontation between American sailor and Huerta's forces broke out at Veracruz. Wilson accepted the mediation of Argentina, Chile, and Brazil, but then supported Francisco "Pancho" Villa, a bandit, until Villa crossed the border and massacred Americans with the intention of recovering Texas and New Mexico territories back to the Mexican motherland. Wilson sent U.S. troops to pursue Villa in 1916. the United States withdrew in 1917, which ended American involvement but left a legacy of distrust in Mexico and Latin America. Progressivism changed American attitudes toward the power of government. In 1917 Americans turned their attention from domestic concerns to foreign affairs as the United States became involved in World War I. 2.- Discuss the impact that World War I had on America domestically and with respect to foreign policy, taking special care to consider the influence that the war had on Progressive reform and the ways in which Progressivism helped shape wartime America. ...read more.

The war greatly increased the responsibilities of the federal government. New government agencies relied mainly on persuasion and voluntary compliance. The War Industries Board urged manufacturers to use mass production techniques and increase efficiency. The Railroad Administration regulated rail traffic; the Fuel Administration monitored coal supplies and regulated gasoline. The National War Labor Board sought to resolve thousands of disputes between management and labor that resulted from stagnant wages coupled with inflation. The Food Administration urged families to observe "meatless Mondays," "wheatless Wednesdays," and other measures to help the war effort. Authors Link and Mc Cormick believed that Wilson's call for American entry into World War I started the decline and endurance of progressivism, in a sense, among others it created a crisis of conscience for most progressives. Progressives believes and principles were tested at the verge of world war, they wanted to introduce to the rest of the world the wonders of a modern world based on democracy, honesty and mostly on progressive ideals. On the other hand, and even fiercely criticizing the barbaric blood shed on the European continent, the U.S. just couldn't stay behind, since strong economic and commercial interests were at stake. The failure of World War I gave progressive detractors enough ammunition to finally be able to prove progressivism wrongfully ideals and to destroy it, passing effectively the U.S. into a new era. Sources: Link, Arthur S., McCormick, Richard L. Progressivism. Princeton University. Harlan Davidson, Inc. Arlington Heights, Illinois. LaFeber, Walter. Polenberg, Richard. Woloch, Nancy. The American Century. Third Edition. Alfred A. Knopf. New York. ...read more.