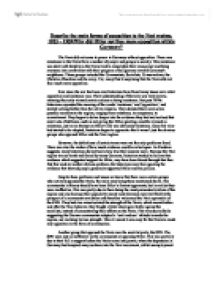 Describe the main forms of opposition to the Nazi regime, 1933 - 1939/Why did Hitler not face more opposition within Germany?

Describe the main forms of opposition to the Nazi regime, 1933 - 1939/Why did Hitler not face more opposition within Germany? The Nazis did not come to power in Germany without opposition. There was resistance to the Nazis from a number of people and groups in society. This resistance was dealt with harshly as the Nazis tried to consolidate their own power and bring everyone into conformity with their program of belligerence toward Germany's neighbours. These groups included the Communists, Socialists, Conservatives, the Christian Churches and the army. Yet, many find it surprising that the Nazis did not face much more opposition. Ever since the war has been over historians have faced many issues as to what opposition and resistance was. Their understanding of the term was very narrow, meaning they only viewed certain actions as being resistance. But post 1970s historians expanded the meaning of the words 'resistance' and 'opposition', and started looking further than the active resistors. They decided there were seven possible reactions to the regime, ranging from resistance, to acceptance, to commitment. They began to delve deeper into the evidence they had and realised that small acts of defiance, such as not giving the Hitler greeting, could be viewed as resistance, just as an attempt on Hitler's life was obviously resistance. ...read more.

This was partially due to their fall in support before the Nazis came into power, when the depression in Germany had tempted many workers into the Nazi movement, whilst unemployment crippled the trade unions, rendering them useless. Because the Social Democrats had few contacts with the establishment, they were easily marginalized. Within weeks of Hitler coming to power the leaders of the socialist movement went into exile or were sent to concentration camps. Trade unions and the SPD were banned, leaving the socialists leaderless and powerless, they were unable to resist the regime. In the early years of the Nazi regime the conservatives were in a stronger position to resist Hitler. Their contacts in the army, bureaucracy and with President Hindenburg, gave them their strength. In spite of that conservative opposition was minimal. As always, Hitler moved quickly to remove nonconformist conservatives in June 1934. The majority of conservatives were sympathetic to Hitler and his cause, who managed to eliminate most doubts. Also, the conservatives welcomed the suppression of the communists and the return of a more authoritarian form of government. The only doubts the conservatives had of Hitler were about the boldness of his foreign policy, which they never openly questioned. ...read more.

Actions such as listening to the BBC and telling anti-Hitler jokes show the non-conformity of thousands. Yet, even these seemingly 'small' deeds could cost a person their life if overheard by a Nazi. Therefore, it appears no act of defiance was insignificant. Due to the harshness of the Nazis, not many would risk their lives to actively resist the regime, making do with jokes in the privacy of their own homes. Nonetheless, it must be remembered that thousands of German citizens supported the Nazis, before they were forced to. It was the true popularity of Nazism, which helped them to come into power. Without support of the public, it would have been much more difficult for the Nazis to come into power and much easier for the opposing groups to resist Nazism. In conclusion it seems that whilst some groups tried to resist Nazism, they didn't try very hard and when certain people did oppose the regime actively, they were quickly purged and severely punished. As a result of these severe punishments, others who opposed the regime were too scared to do so publicly. Therefore, whilst a lot of evidence suggests support for Hitler, there is a huge possibility that this support was forced. Yet, we cannot forget that many German citizens genuinely supported the Nazi regime. ...read more.