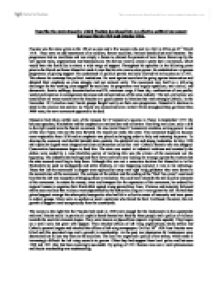 Describe the main stages by which Fascism developed into an effective political movement between March 1919 and October 1922.

Describe the main stages by which Fascism developed into an effective political movement between March 1919 and October 1922. Fascism was the name given to the 100 or so men and a few women who met in a hall in Milan on 23rd March 1919. They were an odd assortment of ex-soldiers, former socialists, National Syndicalists and Futurists. The programme had no manifesto and was simply a forum to channel the protests of new forces thrown up by the war against rules, organisations and bureaucracies. He did not want to create a party but a movement, which would have the flexibility to attract a wide range of support. Throughout his speeches in the following years prior to the March on Rome Mussolini made it clear that his aim was to seize power. He embarked on a vigorous programme of gaining support. He condemned all political parties and only allowed his to become on in 1921. This shows his contempt for political institutions. He went against socialism for going against intervention and detested their emphasis on class struggle and not national unity. The movement saw itself as a left-wing challenger for the working class support for socialism. ...read more.

it was to his advantage. Those that left the movement in disgust were replaced by many new right wing graduates who were drawn to the romanticism of the movement. The collapse of the strikes and the ending of the "Red Two years" convinced him that the left was incapable of bringing about a revolution. He could now intensify the anti-socialist elements of his movement. In return for money, arms and transport for the expansion of his movement, he ordered his regional bosses to organise their Black-Shirt squads along paramilitary lines. Violence and notoriety followed and he soon realised that violence went unpunished by the authorities long as it was against the left. He had thus gained support amongst the urban petty bourgeoisie who had felt a collective sense of insecurity and were prone to radical groups. Many were ex-soldiers or small capitalists who feared for their livelihood. However, the real growth of support came unexpectedly from the countryside. The moves to the right that the Fascists had made in 1920 were enough for the landowners in the countryside and small fascist nuclei in provincial capitals found themselves feted by these people and a policy of violence towards the socialist elements began. ...read more.

This convinced many more that they could be trusted. During the spring and summer of 1922, Fascism seemed the only force capable of stopping socialism. It had some deputies, a strong para-military force and a defined political party. Mussolini disassociated himself from the violence but when talking to the conservatives told them that he was the only one capable of stopping the violence. In the June general strike, Mussolini used this opportunity to show that the left was still a threat. As the strike began the fascists took over the entire infrastructure of the cities and running of public transport etc. This showed that they were an effective, discipline force. The fascist actions impressed the middle class and convinced them that fascism could be trusted in a share of government. By September 1922, republicanism had been dropped, so had anti-clericalism, the dropping of votes for women and for taxes on war profits. Increasingly the emphasis was on nationalism and a strong foreign policy. It was an effective political force as it offered a lot to many in the population. Therefore in summary, clearly a move to the right had been the most important factor in creating an effective political movement. Having an identifiable political party and recognized leader helped, as did the decision to enter parliament and form coalitions. ...read more.