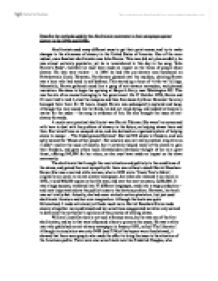 Describe the methods used by the Abolitionist movement in their campaign against slavery in the 1840s and 1850s.

Describe the methods used by the Abolitionist movement in their campaign against slavery in the 1840s and 1850s. Abolitionists used many different ways to get their point across, and try to make changes to the allowance of slavery in the United States of America. One of the more radical, even fanatical abolitionists was John Brown. This man did not plan carefully; he was almost certainly psychotic; yet he is remembered to this day in the song 'John Brown's Body', therefore he must have made an impact on the views of people about slavery. He was very violent - in 1856 he had five pro-slavery men butchered on Pottawotamie Creek. However, Northerners glossed over the murders, claiming Brown was a hero who had acted in self defence. This started up a bout of 'tit-for-tat' killings. ...read more.

She led 300 slaves to freedom, and was aptly named the 'Moses of her people'. Her solution was not really practical long term as it didn't resolve the issue of slavery, but it certainly helped many of the slaves to gain their freedom, and gave others hope. Slaveholders obviously thought of her as a great threat, offering $40,000 for her return, so she must have made an impact on the slave community. The abolitionist that brought the most attention and publicity to the conditions of the slaves, and gained the most sympathy for them was without a doubt Harriet Beecham Stowe. She was a married white woman, who in 1850 wrote 'Uncle Tom's Cabin', originally as a serial in an anti-slavery newspaper, but when she released it as a book in 1852, it sold 300,000 copies in the first year, and over the next ten years, 2,000,000. ...read more.

Although its circulation was only 3000 (and 75% of the buyers were freed slaves), it showed that there were people who made the effort to bring the issue to the attention of the American public. There were also some black men like Frederick Douglas, who toured the country, seeking sympathy to their cause. He in particular was the son of a slave in Maryland, self-educated who toured the USA and later England, making speeches on behalf of the Massachusetts Anti-Slavery Society. This was one of the many abolitionist societies. I do not think that there was one method that worked better than another as they all made quite different impacts to the anti-slavery cause. Some were long term, some were short term; some were peaceful, some were violent; some used words and others used actions. Some got publicity; some achieved freedom for some slaves - but as all of them have been remembered today, they must have made an effect on the movement, and so their actions ...read more.