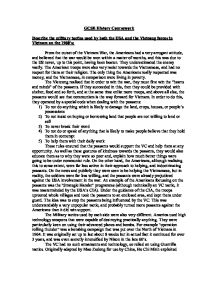 GCSE History Coursework Describe the military tactics used by both the USA and the Vietcong forces in Vietnam an the 1960's: From the outset of the Vietnam War, the Americans had a very arrogant attitude, and believed that the war would be won within a matter of months, and this was due to the US never, up to this point, having been beaten. They underestimated the enemy vastly. The American troops were also very racist towards the Vietnamese, and had no respect for them or their religion. The only thing the Americans really respected was money, and the Vietnamese, in comparison were living in poverty. The Vietcong realised that in order to win the war, they must first win the "hearts and minds" of the peasants. If they succeeded in this, then they could be provided with shelter, food and so forth, and at the same time enlist more troops, and above all else, the peasants would see that communism is the way forward for Vietnam. In order to do this, they operated by a special code when dealing with the peasants: 1) To not do anything which is likely to damage the land, crops, houses, or people's possessions 2) To not insist on buying or borrowing land that people are not willing to lend or sell 3) To never break their word 4) To not do or speak of anything that is likely to make people believe that they hold them in contempt 5) ...read more.

Agent orange was a chemical defoliant that was used to clear areas of terrain where the VC were suspected to be, but it also caused birth defects among women. Another favourite weapon used by the USA was Napalm. It was a mixture of petroleum jelly mixed with phosphorous, that was dropped from fighter-bombers over suspected VC inhabited areas. A small amount was needed, and it would burn through to the bone and victims would die of phosphorous poisoning. America would use a combination of troops that were closely supported by planes and helicopters. The planes would be mounted with a gun known as "Puff the magic dragon", a devastating 30mm cannon that could rip up any thing with a "wall of lead". The VC were ill-equipped compared to the Americans but they had an established route called the "Ho Chi Minh Trail", that was a complex web of jungle tracks that ran from North Vietnam to Saigon, through Laos and Cambodia, carrying about 60 tons of aid per day. In the beginning of the war it, would take around six months for a soldier to navigate the trail, but as the route became used more often, the more experienced soldiers could get through it in six weeks. The Americans tried to bomb this route, but it was invisible from the air, and so impossible to hit with any accuracy, especially from a B52 bomber that was inaccurate from a great height anyway. ...read more.

The US wanted to stay as far away from the enemy as possible, whereas the Vietnamese wanted to be as close as possible to the American troops, so that the Americans could not rely on helicopters coming to kill the enemy. For the Vietnamese this was a very simple task, because not only did the Americans litter everywhere, they also smelt different to the jungle, with all their drugs, cigarettes and western food. Very often, the Vietcong could smell the Americans coming. Even after seeing that they were getting nowhere, the US troops still used the same European fighting tactics, the same weaponry and generally did not adapt well. The Vietcong, on the other hand, ate, slept and lived as the jungle, and so were undetectable. They had, in comparison to the US, very primitive weaponry, but this did not matter, as they were so resourceful, and used tactics to suit their equipment. They also had far more experience than the Americans in fighting wars on this terrain, and had an almost inexhaustible supply of troops, as they had something to fight for: their beliefs and their right to independence and their country. The American troops had no objective, and were fighting for what in their eyes was a totally unimportant country where all the inhabitants did was grow rice and become communists all day, and the majority did not even know where Vietnam was! ...read more.