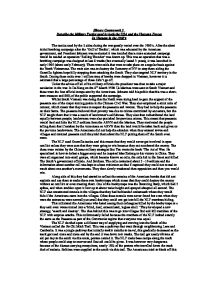 Describe the Military Tactics used by both the USA and the Vietcong Forces In Vietnam in the 1960&amp;#146;s

History Coursework 2_ Describe the Military Tactics used by both the USA and the Vietcong Forces In Vietnam in the 1960's The tactics used by the 2 sides during the war greatly varied over the 1960's. After the short initial bombing campaign after the 'Gulf of Tonkin', which was educated by the American government, and President Johnson was re-elected it was decided that a more sustained campaign would be needed so operation 'Rolling Thunder' was drawn up. This was an operation that was a bombing campaign was designed to last 8 weeks (but eventually lasted 3 years), it was launched in early 1965 (about early February). There were raids that were to take place on a regular basis against the North Vietnamese. The main aim was to destroy the Economy of NV to stop them aiding the Guerrilla fighters hopefully stopping them attacking the South. They also targeted NLF territory in the South. During these raids over 1 million tons of bombs were dropped in Vietnam, however it is estimated that a large percentage of these didn't go off. Under the advise off all of his military officials the president was then to take a major escalation in the war. In Da Nang on the 8th March 3500 Us Marines were sent to South Vietnam and these were the first official troops sent by the Americans. ...read more.

One of the booby traps was the Bouncing Betty, which had 3 spikes, and when trodden upon it flew up to about waist height and sprayed shrapnel all around. The NLF also constructed tunnels in the villages that they had befriended underneath where they would hide if the Americans came into the villages. Often these tunnels were never found but even when they were the entrances were normally so small that they could not get into kill the NLF members hiding. This infuriated the Americans who hated seeing their colleagues killed by the booby traps or s they said even worse turned into a 'blind, deaf, emasculated, legless shell.' They developed a new strategy, 'search and destroy'. The idea behind this was to go into villages find and kill members of the NLF with surprise attacks. This unfortunately failed because the members of the NLF looked exactly the same as the Peasants as part of the Communist regime that everyone was equal. The NLF decided upon a different way of supplying and moving into the South of the Vietnam called the Ho Chi Minh Trail. This was a pathway that went through neighbouring Laos and Cambodia. It was a jungle pathway that initially took 6 months to travel, this gradually decreased as the track got used more and more and by the end it was down to 6 weeks. ...read more.

The Vietcong had been setting out a day when all the soldiers who had died fighting for them were to be remembered on the 31st January on every year. The end of 1967 had lost 90,000 men had been lost by the Vietcong; it was called the Tet New Year festival. In 1968 the Vietcong celebrated Tet day 2 days early and on the 31st January 70,000 men launched a surprise attack. They attacked Saigon and managed to get into the fortress that was the American embassy and kill 5 marines. They also took over the Saigon's main radio station for a few hours; this was a sign for the Americans that the Vietcong had an unendless supply of men. The new president was President Nixon, he was quickly trying to get the soldiers out of Vietnam but without it falling into communist hands, he decided upon the idea of Vietnamization. This meant that he would try to get the responsibility of the war passed on to the South Vietnamese people. There was a law passed that called up all men between 17 and 43 and in June 1969 President Nixon withdrew 25,000 troops and another 60,000 were to leave in December. But to start with there were 540,000. The American advisors told him that ...read more.