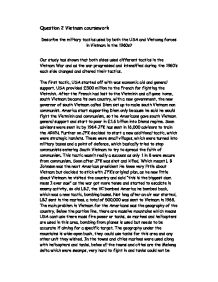 Describe the military tactics used by both the USA and Vietcong forces in Vietnam in the 1960s?

Question 2 Vietnam coursework Describe the military tactics used by both the USA and Vietcong forces in Vietnam in the 1960s? Our study has shown that both sides used different tactics in the Vietnam War and as the war progressed and intensified during the 1960's each side changed and altered their tactics. The first tactic, USA started off with was economic aid and general support. USA provided �500 million to the French for fighting the Vietminh. After the French had lost to the Vietminh and all gone home, south Vietnam became its own country, with a new government, the new governor of south Vietnam called Diem set up to make south Vietnam non communist. America start supporting Diem only because he said he would fight the Vietminh and communism, so the Americans gave south Vietnam general support and start to poor in �1.6 billion into Diems regime. Soon advisors were sent in; by 1964 JFK has sent in 16,000 advisors to train the ARVN. Further on JFK decided to start a new additional tactic, which were strategic hamlets. These were small villages, which were turned into military bases and a point of defence, which basically tried to stop communists entering South Vietnam to try to spread the faith of communism. This tactic wasn't really a success as only 1 in 8 were secure from communism. Soon after JFK was shot and killed. ...read more.

Like the My Lai incident where 400 hundred villagers were murdered by an American team on a search and destroy mission. As the war intensified so did LBJ's tactics, saturation bombing was used instead of selective bombing, which was bombing anything as many times as possible over and over. Also operations of bombing were set up, like "Operation Rolling Thunder" which was an all out attack of planes on key targets in north Vietnam. Apart from bombing that wasn't the only thing that got more intense in Vietnam, more young Americans were forced in Vietnam through conscription, more search and destroy missions were being undertaken and more bodies were building up each week, up to 583 bodies were coming in every week. Also the brutality, torture and interrogation of Vietnamese people were rising, more and more angry marines were killing more innocent villagers. Soon enough America started to use chemical weapons, which showed how desperate America was to combat communism. They used napalm mostly, which burnt the skin of the helpless victim subject to it, also agent blue and agent orange were used which was weedkiller which basically stripped leaves off the dense forest then bombs were dropped that splintered trees to tiny shreds then large mechanical ploughs would tear down the remaining part of the forest. These terror tactics were used, as America was getting very desperate for a win. ...read more.

Also when America starts to bomb the Vietcong they go underground, there's a hole network of tunnels underground built by everyone, each person is set 3 meters of tunnel a day, in the tunnels there are supply bases, hospitals restaurants and there's also a sleeping quarters. Vietcong forces make the first move on America by sinking a US submarine; their first major bombing was on Pleiku. Which injured more then 100 marines and killed 13. As the war intensified the VC decided on a open warfare battle, this was called the TET offensive it was a attack on the capital city Saigon, it was the first time they decided to go out on a open warfare battle. This was a major mistake as 30,000 VC soldiers were killed compared to the 2500 American marines. They never recovered from this defeat and this led to peace talks with America. It is clear that the US and VC used different tactics us tactics started off as general support then went into military action then into terror tactics as they started to become desperate for a win and a quick win. While the VC tactics were more win the support of the people, then guerrilla warfare, but when they became desperate for a win like the US and their terror tactics, the VC decided on a open warfare battle, this went wrong the same as the terror tactics by America. Both of these tactics resulted in the ending of the war. ...read more.