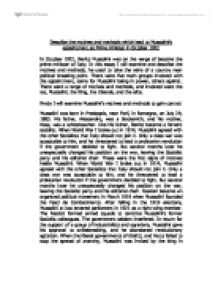 Describe the motives and methods which lead to Mussolini's appointment as Prime minister in October 1922 In October 1922, Benito Mussolini was on the verge of become the prime minister of Italy. In this essay I will examine and describe the motives and methods, he used to take the reins of a country near political breaking point. There were five main groups involved with the appointment, some for Mussolini being in power, others against. There were a range of motives and methods, and involved were the ras, Mussolini, the King, the Liberals, and the elite. Firstly I will examine Mussolini's motives and methods to gain control. Mussolini was born in Predappio, near Forli, in Romagna, on July 29, 1883. His father, Alessandro, was a blacksmith, and his mother, Rosa, was a schoolteacher. Like his father, Benito became a fervent socialist. When World War I broke out in 1914, Mussolini agreed with the other Socialists that Italy should not join it. ...read more.

When the liberal governments of Giolitti, and Facta failed to stop the spread of anarchy, Mussolini was invited by the king in October 1922 to form a government. So the methods used by Mussolini weren't as evident by himself, as compared to the methods of the RAS. However Mussolini's motives were definitely a deciding factor on his appointment as prime minister. The RAS motives and methods were similar, to Mussolini's, however, there were more methods that the ras used than, motives. The only main motive was that they wanted a united Italy free from the socialists. The methods used by the ras were mostly violence based, such as tourture, beatings, arson, and force-feeding live toads, and the infamous castor oil treatment. The most important factor in Mussolini's so called 'rise to power' was the king, Victor Emmanuel III. The motives that led to Mussolini's appointment were mainly due to the fact that He feared his pro fascist cousin, The Duke of Aosta, as he believed he would try and take the throne. ...read more.

They succeeded in this for 8 hours until the king reversed his declaration. The motives were to either stop Mussolini taking complete control of the government, or to set up a joint government with only one liberal politician. So every liberal leader wanted either to be in power with Mussolini, or to become PM on their own. Salandra was the only liberal politician to support Mussolini. He originally asked Mussolini to join his government, but was rejected, so instead pushed the king to appoint Mussolini as Prime minister, to stop his rival Giolitti, becoming PM once again. Facta asked the king to declare martial law, and once withdrawn, Facta resigned. Giolitti was Mussolini's most feared politician, his methods, in the end were to support Mussolini's government. The motives and methods which lead to Mussolini's appointment as Prime minister in October 1922, were great in number, because the appointment was not through Mussolini seizing power from the king and Facta, in bloody battles on the streets of Rome. The appointment was due to an amalgamation of the methods and motives of the ras, the king, the liberals, the elite, and Mussolini's personal experiences and will. ...read more.