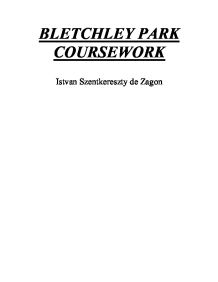 Describe The Organisation And Work Of People At Bletchley Park Bletchley Park or Station X, situated 50 miles North-West of London, was the site of the British secret military intelligence

BLETCHLEY PARK COURSEWORK Istvan Szentkereszty de Zagon 1.Describe The Organisation And Work Of People At Bletchley Park Bletchley Park or Station X, situated 50 miles North-West of London, was the site of the British secret military intelligence, whose aim was to break the German Enigma code. The main reason was to obviously win the war save lives. Other reasons were to stop, or be prepared for German attack, and have a psychological advantage over the enemy as Bletchley Park was almost always able to know when and where the Germans would attack. The Enigma codes were thought to be unbreakable. At Bletchley Park there were some of the most brilliant minds of Britain; most of the code breakers were expert linguists or mathematical geniuses, individuals like Alan Turing and Dilly Knox. . The 'Y' Service, a chain of wireless intercept stations across Britain and in a number of countries overseas, listened in to the enemy's radio messages. Thousands of wireless operators, many of them civilians but also Wrens, WAAF personnel and members of the ATS, tracked the enemy radio codes up and down the dial, carefully logging every letter or figure. This information was then sent to Bletchley Park where the codes were broken. ...read more.

At least 200 of these machines were built and were produced throughout the war. In the final year of the war Tommy Flowers invented the Colossus, the first programme for computer which could break down German Enigma codes in only few hours. Another factor that help those working at Station X were the mistakes of the German operators. It is likely that if the Germans had used the Enigma exactly as directed, it would have been a lot harder to crack. Common mistakes were made, such as not replacing or changing the order in which the cog wheels were arranged, not arranging the two plugs in the correct formation. The Germans then introduced a fourth rotar, but it was always left in neutral. Another error was used to its maximum effect was that of the double helix. In many cases, the enigma was not anywhere near as random as the Germans had first hoped, and in a few cases the British were able to see clear patterns were letters were exactly the same within the code. Whilst this was not necessarily the Germans fault, it was still as mistake that they did not know about and failed to consider. These mistakes were exploited and picked apart by the British, giving them a further chance in forming patterns out of the codes. ...read more.

This operation was massive and brought 130.000 man across the Channel by sea and 23.000 by air. From this point the allies used their air superiority to devastating effect against German forces. Resistance fighters disrupted German communications and destroyed supplies taken to the German forces. Churchill and Roosevelt signed a Secret Intelligence Pact where they agreed that to support each other in secret intelligence. In fact the role of the Allied leaders was important to the success of Bletchley Park, the British Prime Minister Winston Churchill visited Bletchley Park in September 1941 to boost the moral of those working people at Bletchley Park and promised to provide resources that were needed to continue vital intelligence work. Churchill went as far as to claim that Station X- "The goose that laid the golden egg but never cackled.", suggesting that the work done at Bletchley Park brought a great and crucial success.. Bletchley Park played a major role in the Allied victory in of the Second World War as they were able to break down the German Enigma codes this led to keep vital supplies. The success of the code breakers was one of the key factors in the Allied victory. This helped save many lives. Some historians as gone as far as suggesting that Bletchley Park shortened the war, some believe that it shortened the war by at least two years. (676 words) ...read more.