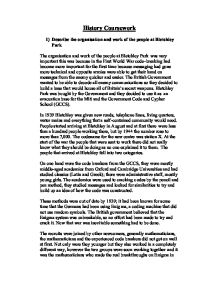 Describe the organisation and work of the people at Bletchley Park.

History Coursework 1) Describe the organisation and work of the people at Bletchley Park The organisation and work of the people at Bletchley Park was very important this was because in the First World War code-breaking had become more important for the first time because messaging had gone more technical and opposite armies were able to get their hand on messages from the enemy quicker and easier. The British Government wanted to be able to decode all enemy communications so they decided to build a base that would house all of Britain's secret weapons. Bletchley Park was bought by the Government and they decided to use it as an evacuation base for the MI6 and the Government Code and Cypher School (GCCS). In 1939 Bletchley was given new roads, telephone lines, living quarters, water mains and everything that a self-contained community would need. People started arriving at Bletchley in August and at first there were less than a hundred people working there, but by 1944 the number rose to more than 7,000. The codename for the new centre was station X. At the start of the war the people that were sent to work there did not really know what they should be doing as no one explained it to them. ...read more.

At first there were only a few Y Service stations but when war broke out mobile units were sent to France and from 1941 more stations were set up around Britain. The success of Bletchley depended on the Y Service being able to pick up and record the messages in Morse code without this Station X would not be able to function properly. It was important to record the beginning of the message because this was often the clue to cracking it and as the war went on the Y Service operators became more and more skilled at finding the correct frequencies at the right time of day. The work at Bletchley was centred on Hut 6 and Hut 3. Hut 6 received signals and messages and attempted to decode them, the people that worked there rarely paid much attention to what was in the messages; their role was to simply break through the enemies attempts at concealment. Hut 3's job was to break the code as best they could and turn it into text, the intelligence offers attempted to make sense of the decoded messages which were often scraps of text in German, and later Italian and Japanese. ...read more.

A few days after this Norway was invaded and even though most of the soldiers in Norway were territorials (part time soldiers) they could have been better prepared than they were if the information had been taken seriously. A second example of Station X being ignored came two months later. In late May there was another build up of messages in the Baltic which made it look like German warships were about to sail out into the Atlantic. Again the OIC were informed but did not pass the message on to the Home Fleet at Scapa Flow. The results of this blatant ignorance were disastrous. HMS Glorious, HMS Acasta and HMS Ardent were all sunk and all 1500 men were killed by German battleships Scharnhorst and Gneisenau. When Bletchley Park was listened to and their evidence was acted on the British had the upper hand on the Germans, this is clearly shown by the consequences of The Battle of Matapan. It became clear that the Italians were going to invade Yugoslavia and later that German forces were being sent to back up the Italians when they were stopped. They tipped off Admiral Cunningham and he sunk three heavy cruisers and two destroyers from the German fleet and suffered no British losses. This stopped the Germans from supporting the Italians. ...read more.