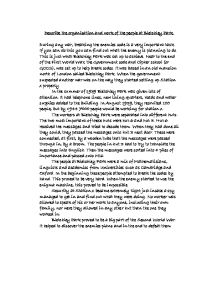 Describe the Organisation and Work of the People At Bletchley Park.

Describe the organisation and work of the people at Bletchley Park. During any war, breaking the enemies code is a very important task. If you can do this you can find out what the enemy is planning to do. This is just what Bletchley Park was set up to achieve. Near to the end of the First World War, the Government code and Cipher school (or GCCS), was set up to help break codes. It was based in an old mansion north of London called Bletchley Park. ...read more.

In August 1939, they recruited 100 people, but by 1944 7000 people would be working for station x. The workers at Bletchley Park were separated into different huts. The two most important of these huts were hut 6 and hut 3. Hut 6 received the messages and tried to decode them. When they had done all they could, they passed the messages onto hut 3 next door. These were connected, at first, by a wooden tube that the messages were passed through in, by a broom. ...read more.

This proved to be very hard. When the enemy started to use the enigma machine, this proved to be impossible. Security at Station x became extremely tight just incase a spy managed to get in and find out what they were doing. No worker was allowed to speak of his or her work to anyone, including their own family, nor were they allowed in any other hut than the one they worked in. Bletchley Park proved to be a big part of the Second World War. It helped to discover the enemies plans and in the end to defeat them ...read more.