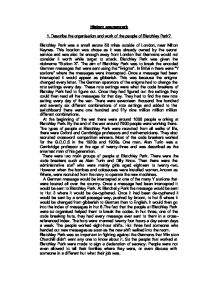 Describe the organisation and work of the people of Bletchley Park?

History coursework 1. Describe the organisation and work of the people of Bletchley Park? Bletchley Park was a small estate 50 miles outside of London, near Milton Keynes. This location was chose as it was already owned by the secret service and was also far enough away from London that Germans would not consider it worth while target to attack. Bletchley Park was given the nickname "Station X". The aim of Bletchley Park was to break the encoded German messages that were sent using the "Enigma". In Britain there were "Y stations" where the messages were intercepted. Once a message had been intercepted it would appear as gibberish. This was because the enigma changed every letter. The German operators of the enigma had to change the rota settings every day. These rota settings were what the code breakers of Bletcley Park had to figure out. Once they had figured out the settings they could then read all the messages for that day. They had to find the new rota setting every day of the war. There were seventeen thousand five hundred and seventy six different combinations of rota settings and added to the switchboard there were one hundred and fifty nine million million million different combinations. At the beginning of the war there were around 1000 people working at Bletchley Park. By the end of the war around 7000 people were working there. ...read more.

We all know of the masterminds that worked at Station X, but we seem to forget about a key role in the breaking of German codes. Women did one of the most important jobs at Station X. this was of course filing. Every message ever decoded was kept in a cross-reference index, with the thought in mind that it might be needed again someday. There were huge archives of just pieces of paper, on their own meaningless, but conjoined, perfect English. As well as this you had the great minds working a Station X. Every single person at Bletchley Park was working as hard as they could with the main incentive, to break the codes. With out the hard work that was put in, Enigma would not have been broken at all. As with many things in life, it's all about luck. Bletchley Park was no exception. An example of this is when the people at Station X received the same message twice, and at the same time. Lucky someone noticed it was the same message. Luck didn't break the codes it just saved a little time, but without the luck the codes would be a long way from broken. A vitally important resource in the code breaking was technology, especially as the codes were getting more and more difficult to break every single day. Even after the Enigma was cracked it could take several days to decode a message, by hand that is, and by then it was probably to late. ...read more.

Station X decode message which contained text such as " today's the day minus three". The Italians also sent a very long message, which contained information like how many ships the Italians had, they had basically sent the battle orders right to the enemy commander. This was very important as it meant the British could anticipate the attack. I think Bletchley Parks role in this battle was very important, as it not only embarrassed the Italians but it also gave the British a boost in morale. It also raised the commanders of the army's thoughts about Station x. I think that Bletchley Park played a very important role in the Second World War. It decode many messages that meant German ambushes failed and also that the escorts of the convoys were able to destroy the U-boats before the convoys were destroyed them selves. But Bletchley Park wasn't the only influence on the outcome Second World War, the men in the armed forces worked very hard. I also think that with out the work of the Red Army in Russia the war would have been very different. What if there was no Station X would the war have been won by the Nazi's? Would millions and millions of men died? Would Hitler's scientists have developed the nuclear bomb? Would Hitler have killed us all with the nuclear bomb he was sure to have in his armoury? Or would we even be speaking German now in stead of our good old English? History Coursework Bletchley Park Daniel Booth Mr Taubman ...read more.