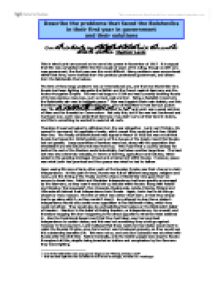 Describe the problems that faced the Bolsheviks in their first year in government and their solutions Give me four years to teach the children and the seed I have sown will never be uprooted - Vladimir Lenin This is what Lenin announced as he came into power in November of 1917. It is argued that this was completed within the first couple of years of his ruling, though as with any new government, the first year was the most difficult. Many problems were encountered within that time, some handed from the previous provisional government, and others from the Bolsheviks themselves. The first of these large problems was an international one, and that was World War One. Russia had been fighting alongside the British and the French against Germany and the Austro-Hungarian Empire. The war had begun in 1914 and was currently draining Russia of its few precious resources, such as food, coal and iron. Being a Socialist movement, the Bolsheviks aim was to instigate peace.1 War went against their main beliefs, and this therefore had to be dealt with straight away. One of Karl Marx's most famous quotes was "No nation which oppresses others can itself be free" and Lenin was a great admirer of Marx and his theories on Communism. Not only this, but if the war had continued and had been won, Lenin was afraid that Germany may claim some of their land in victory, and this is something he wanted to avoid at all costs. ...read more.

However, the tension between the Bolsheviks and other parties and social groups did not end there. In 1918 Civil War broke out in Russia, primarily between the Reds and the Whites, however every party that was opposed to the Bolshevik rule join in on the Whites side. This occurred as a result of the shutting down of the Constituent Assembly, and because of the scare of Communist revolutions across the world. The Allies decided to join the Civil War a few weeks in, and fought against the Bolsheviks. They also feared that the setting up of a Communist ruling within Russia would prompt other nations to do the same. They were angry at the fact that Russia had withdrawn from the war in such a defeatist manner. At this time, the Bolsheviks had introduced the Cheka into Russian society. This was lead by Felix Dzerzhinsky and was aimed to be a secret police force. However the Cheka's tactics were far from discreet. It is estimated that by 1924 the Cheka had executed more that 250,000 people. Different sections of the Cheka had preferred methods of torturing and killing citizens who did not comply with the Communist way of living. For example, in Kiev they placed rebels in a coffin with a decaying corpse, buried them alive and then half an hour later dug them out again.6 The Cheka were heavily involved in the Bolsheviks defence during the Civil War and were renamed the Red Terror because of the horror they inflicted into people's lives. ...read more.

The only ruling was that they were not allowed to employ anyone else to do their work - the land had to be looked after by themselves only. Obviously the peasants were not used to this way of being treated and became greedy. Peasants took more land than they could afford to keep, and as result lots went to waste. Other peasants had very small amounts of land and could not make enough food to survive. This resulted in yet worse problems with food shortages in the cities, whilst some of the peasants thrived in the countryside. In all, it seemed that some of the policies introduced by Lenin had made Russia worse off than before, and some were even saying that the reign of Tsar Nicholas II was a better one to live under, rather than this Bolshevik rule. Many of the Russian citizens saw that Lenin was only thinking of short-term solutions to the problems that had occurred, rather than thinking of the long-term options and contemplating the consequences of the decrees and strategies before he put them into practise. However, we have to remember that all this was in Lenin's first year of power and, like all leaders; he faced many problems that needed dealing with. Lenin did the best he could to cope with these given the position he was in, and it is debatable that anyone else could have done better in the circumstances. Lenin continued to lead the Russian people, later developing the New Economic Plan, and was only replaced upon his death in 1924 by Stalin. Petrograd was renamed Leningrad in his honour. ...read more.