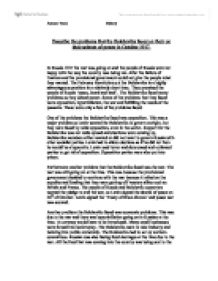 Describe the problems that the Bolsheviks faced on their on their seizure of power in October 1917.

The people of Russia and Bolshevik supporters wanted the pledge to end the war, so Lenin signed the decree of peace on 26th of October. Lenin signed the 'Treaty of Brest-litovsk' and peace war was secured. Another problem the Bolsheviks faced was economic problems. This was due to the war and there was hyperinflation going on in Russian at the time. A currency would have to be introduced. Many small businesses were forced into bankruptcy. The Bolsheviks want to take industry and banking into public ownership. The Bolsheviks had to set up workers committees. Russian was also facing food shortages at the time due to the war. All the food that was coming into the country was being sent to the men on the front line first. ...read more.

I believe the most important factor the Bolsheviks faced was war. This is because the war leads to even more problems for the country. Due to the war the Bolsheviks had to deal with a lot of other problems within the country such as hyperinflation and food shortages. However I believe the war wasn't the only important factor the Bolsheviks had to face on their seizure of power as they also faced geographical problems and problems facing land and peace. The Bolsheviks held on to power by closing down opposition press and even putting some parties into prison. Lenin even used terror through the cheka. They also held on to power by making Russia one party state. Lenin also made newspaper state run and made everything pro-communism and bolshevism, schools, books, art and even newspapers. Annum Yasin History ...read more.