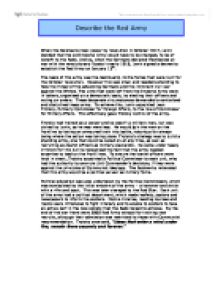 Describe the Red Army When the Bolsheviks took power by revolution in October 1917, Lenin decided that the old Imperial Army would have to be changed, to be of benefit to the Reds. And so, when the Germans declared themselves at war with the revolutionary Russia in early 1918, Lenin signed a decree to establish the Red Army on January 15th. The basis of this army was the Red Guard, militia forces that were built for the October revolution. However this was small and needed extending to face the threat of the advancing Germans and the imminent civil war against the Whites. The units that were left from the Imperial Army were in tatters, organised on a democratic basis, by electing their officers and voting on orders. These desperate circumstances demanded a centralised and disciplined mass army. To achieve this, Lenin appointed Leon Trotsky, formerly Commissar for Foreign Affairs, to the role of Commissar for Military Affairs. This effectively gave Trotsky control of the army. Trotsky had trained as a lawyer and so wasn't a military man, but was picked by Lenin, as he was merciless. ...read more.

By the end of the war there were 3000 Red Army schools for training new recruits, although their admission was restricted to those with Communist recommendation. Trotsky once said, "Ideas that enter a mind under fire, remain there securely and forever." Recruitment to the army was always a problem for the Reds. At the beginning the Red Army was a voluntary organisation, with recruits needing 2 letters of recommendation that also stated their allegiance to the Communist movement. This meant the size of the army was quite small in comparison to the extent of the Soviet Union, and only grew very slowly. In May 1918, conscription was introduced, which meant compulsory military service for men between the ages of 18 and 40. In reality however, men both much younger and much older were conscripted too. There were no birth certificates in Russia at the time, which meant ages were guessed from physical appearance. Women could legally fight in the army but were given to choice of factory work too, making ammunition and arms. As a result, the army grew from 331,000 in August 1918 to 600,000 by the end of the year. ...read more.

Soldiers were sent out to take vegetables and grain from peasants by force, as they were needed on the frontlines. Anyone found to be hiding excess food was severely punished, usually by death. This was quickly becoming a standard disciplining method used by the Bolsheviks. Many peasants revolted against this, cutting down sown areas of land. There were various uprisings of this sort, predominantly in Siberia. Despite this backlash from the people, Lenin insisted this was necessary in order to defeat the White Armies. In summary drastic measures were used to ensure the Red Army was well equipped, funded and recruited for, and to many it seems that their successes were inevitable, given their leadership and geographical positioning. The Reds had control of the large cities and transportation routes, whereas the Whites were disjointed, not unified in cause of belief, giving the Reds a large advantage. Trotsky lost his powerbase when Lenin died and was eventually exiled in 1925. He was a disgraced man and engaged in a power struggle with Stalin and several others as a successor for the leader of the Bolsheviks. Voroshilov took Trotsky's role after his death. The Red Army continued to exist until the collapse of the Soviet Union in 1991. ...read more.