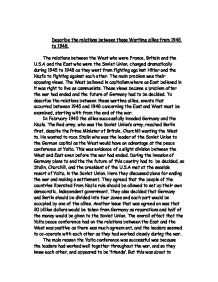 Describe the relations between these Wartime allies from 1945 to 1948.

Describe the relations between these Wartime allies from 1945 to 1948. The relations between the West who were France, Britain and the U.S.A and the East who were the Soviet Union, changed dramatically during 1945 to 1948 as they went from fighting against Hitler and the Nazi's to fighting against each other. The main problem was their opposing views. The West believed in capitalism where as East believed in it was right to live as communists. These views became a problem after the war had ended and the future of Germany had to be decided. To describe the relations between these wartime allies, events that occurred between 1945 and 1948 concerning the East and West must be examined, starting with from the end of the war. In February 1945 the allies successfully invaded Germany and the Nazis. The Red army, who was the Soviet Union's army, reached Berlin first, despite the Prime Minister of Britain, Churchill wanting the West to. He wanted to race Stalin who was the leader of the Soviet Union to the German capital as the West would have an advantage at the peace conference at Yalta. This was evidence of a slight division between the West and East even before the war had ended. ...read more.

Stalin thought the U.S.A were trying to demonstrate to him and the Soviet Union that they were more powerful. Overall the atomic bomb showed that the Soviet Union were beginning to be isolated and that they no longer had say in what decisions the West made. After the war, the Soviet Union liberated Eastern European countries from Nazi rule. They did this because they wanted allies to feel supported and protected as Russia was a pariah country and so established governments in these countries, which were friendly with the USSR. This affected relations as Truman viewed the Soviet's occupation of Eastern Europe as a blatant threat of the spread of communism. This also demonstrated that Soviet's knew that the West no longer trusted them and so felt threatened. The Soviets occupation of Eastern Europe led Western countries U.S.A and Britain revealing publicly their true views about the Soviet Union and Stalin. In 1945, Prime minister of Britain at this time, Winston Churchill made a speech telling President Truman that an iron curtain has been drawn in Europe and he said, "we do not know what is going own behind it". He also said the countries that lie east of the line would soon be completely in the hands of the USSR. ...read more.

The West tried to make their sectors strong because they didn't want to recreate the conditions where the Germans became desperate enough to support a Hitler figure again. They tried to do this by introducing a new currency called the D- mark that replaced the old mark, which had dropped in value through inflation. The changes that the west made strengthened the economy in the Western zones made the capitalists zones wealthy. This posed as a real threat to the East as they feared that if the Western zones became rich and strong, then the Germans would once again be able to threaten the Soviet Union. The relations between the East and the West have dramatically deteriorated over three years as the east and west were allies fighting against Hitler in 1945, but in 1947 the west were acting against the east, and displaying to the world that they were the enemies. The change in leaders definitely had the most impact on relations as President Roosevelt had a closer relationship with Stalin, but when he died and President Truman took over, his suspicions were too high for the East and West leaders to remain allies. But the main division that started this century of fear was the fact that the West belived in capitailism and the East believed in communism. ...read more.