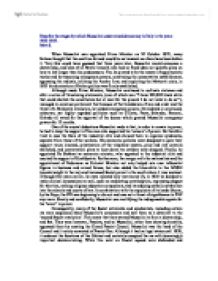 Describe the stages by which Mussolini undermined democracy in Italy in the years 1922-1925.

Describe the stages by which Mussolini undermined democracy in Italy in the years 1922-1925. Matt S. When Mussolini was appointed Prime Minister on 30 October 1922, many Italians thought that the coalition formed would be as transient as others have been before it. Very few could have guessed that three years later, Mussolini would announce a dictatorship, and least of all Benito himself, who had no fixed ideas nor specific plans on how to last longer than his predecessors. Yet, he proved to be the master of opportunistic tactics and by assuming emergency powers, convincing the conservative establishment, appeasing the radicals, utilizing the Acerbo Law, and exploiting the Matteotti crisis, in 1925 his domination of Italian politics was firmly established. Although made Prime Minister, Mussolini continued to cultivate violence and after a series of threatening statements, (one of which was "I have 300,000 black shirts that could abolish the constitution but at least for the present I do not wish to do so''), managed to convince parliament that because of the breakdown of law and order and the threat of a Bolshevik revolution, he needed emergency powers. ...read more.

In combination with the expulsion of its leader Sturzo, by the Pope, the PPI was beginning to die out and was not a threat of significance to PNF any more. Slowly and confidently, Mussolini was mollifying the indispensable agents for his 'hover' in power. Consequently, many of the fascist extremists and syndicalists, including certain ras were suspicious about Mussolini's concession and saw them as a deterrent to the 'second fascist revolution'. This meant that they wanted Mussolini to form a dictatorship, and fast. They were however, Fascists, and so Mussolini, rather than showing brutality, appeased them by creating the Grand Fascist Council. Mussolini was the head of the Council and it solely consisted of Fascist Ras. Although it had no legal status until 1928, it undercut the functions of the Cabinet and certainly occupied the ras with (seemingly) important decision-taking. While this went on Fascist squads were disbanded and converted into the MVSN- the National Security Voluntary Militia, paid (!) and full-time. The 'volunteers' swore an allegiance not to the State or the King or even the Fascist Party, but to Benito Mussolini. ...read more.

Finally, the last significant stage was the brutal murder of the socialist leader Giacomo Matteotti, a well-known critic of Mussolini and his policies. When highly positioned fascists such as Dumini and Filipelli were implicated in the murder, there was a widespread belief that the Duce had something to do with it. Riots, unrest, and numerous fiery questions posed on the government shook Mussolini's chair and he himself was seen 'red-eyed and unshaven'. However, on 3 January 1925, he decided to 'personally' stand behind fascist action (except the murder) and craftily ask for 'personal' powers in order to alleviate problems. He was granted this notion due the divide within his opponents, as some decided to leave parliament with the Aventine Secession call-sign, and the King's belief that now, more than ever, Mussolini can be controlled. In conclusion, there were several stages through which Mussolini undermined democracy in the years 1922-1925 with most important being the assumption of emergency powers, 'swindling' the conservative establishment for support, appeasing the radicals by creating authoritarian bodies, utilizing the Acerbo Law, and exploiting the Matteotti crisis to his benefit thus declaring the commencement of a totalitarian regime. ...read more.