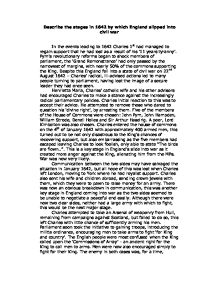 Describe the stages in 1642 by which England slipped into civil war In the events leading to 1642 Charles 1st had managed to regain support that he had lost as a result of his '11 years tyranny'. Pym's revolutionary reforms began to shock members of parliament, the 'Grand Remonstrance' had only passed by the narrowest of margins, with nearly 50% of the commons supporting the King. Despite this England fell into a state of civil war on 22nd August 1642 - Charles' radical, ill-advised actions led to many people turning to parliament, having lost the image of a secure leader they had once seen. Henrietta Maria, Charles' catholic wife and his other advisors had encouraged Charles to make a stance against the increasingly radical parliamentary policies. ...read more.

War was now very likely. Communication between the two sides may have salvaged the situation in January 1642, but all hope of this was lost when Charles left London, moving to York where he had royalist support. Charles also sent his wife and children abroad, sending crown jewels with them, which they were to pawn to raise money for an army. There was now an obvious breakdown in communication, this was another key stage in England coming into war as the two sides seemed to be unable to negotiate a peaceful end easily. Although there were now two clear sides, neither had a large army with which to fight, this would be the next major stage. ...read more.

The West and North took the side of the Royalists (the 'Cavaliers') the East and South supporting Parliament (the 'Roundheads'). Despite both sides taking arms, neither had raised their standard, the King was issued a further chance to prevent war. Parliament issued Charles '19 Propositions', which he was to follow if war was to be stopped. Naturally Charles did not accept this, defending his 'Divine right' and not accepting further movements against him. The navy turned to Parliament, securing their control of the sea, and creating further problems for Charles, as it would hinder his chances of acquiring support from his wife. This final stage had produced no major events towards a settlement, with no chance of a peaceful end with such clearly defined forces the King raised his standard on the 22nd August 1642 in Nottingham. ...read more.