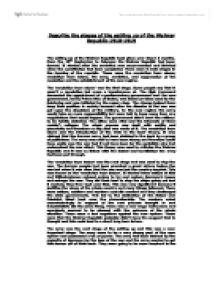 Describe the stages of the setting up of the Weimar Republic 1918-1919 The setting up of the Weimar Republic took place over about 5 months. From the 29th September to February the Weimar Republic had been formed. It started after the armistice was recommended and finished when the constitution had been completed. There were 6 main stages in the forming of the republic. These were the revolution from above, revolution from below, the army, armistice, and suppression of the revolution and the establishment of the new regime. The 'revolution from above' was the first stage. Some people say that it wasn't a revolution but more a transference of. The High Command demanded the appointment of a parliamentary government and the new government, led by Prince Max of Baden, was based on ideas used by the Reichstag and was initiated by the upper class. The change helped them keep their position in society because after the disaster of the war was put upon the shoulders of the military. In the new regime the army would take on more responsibility but were told to keep away from any negotiations that would happen. The government didn't want the military to be totally defeated. ...read more.

The army was the next stage of the setting up and this was a very important stage. The army were to be a very strong part of the new system and possessed a lot of power. The army had been blamed by the majority of Germany for the loss of the war and the army wanted to get this demon off of their back. They were going to be more involved in the running of the country than they were before and they wanted more power. They wanted more favours from the government and in return agreed to stay away from any negotiations. The new socialist government made an agreement with General Wilhelm Groener to gain the support of the army. The government obviously saw the army as very important and thought they were vital if the Weimar Republic was to be a success. In the agreement it was said that the government in return would oppose revolutionary uprising. Both sides to the partnership had their own way and this meant that they could meet in the middle and try to be successful. The next stage was the armistice. An armistice is a cease of fire but not surrender. ...read more.

After this the left wing of politics was divided and would never really recover. The Final stage was the establishment of the new regime. A new elected National Assembly met at Weimar and agreed a new constitution. After the actions of the KPD (spartacists) the government fled to Weimar. From then on it was associated with betrayal, anarchy and selling out from both sides of the political spectrum. From November 1918 to January 1919, Germany was governed dictatorially by the Council of People's Commissioners. In those three months, it issued a large number of orders. At the same time, its main activities were confined to certain things. For example the eight-hour workday, important national health insurance and the re-instatement of demobilised workers. Occasionally the name "Die Deutsche Sozialdemokratische Republik" (The German Social-Democratic Republic) appeared in leaflets and on posters from this era, although this was never the official name of the country. The establishment of the Weimar republic had a lot of ups and downs and didn't turn out to be as simple as it could have been. Not all of the country agreed with the new regime and made their opinions known, especially the KPD. The six different stages all had their own significance. The elites had their part, the sailors and soldiers had their part, the army had heir part and the political parties had their part. ...read more.