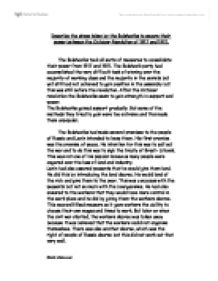 Describe the steps taken by the Bolsheviks to secure their power between the October Revolution of 1917 and 1921.

Describe the steps taken by the Bolsheviks to secure their power between the October Revolution of 1917 and 1921. The Bolsheviks took all sorts of measures to consolidate their power from 1917 and 1921. The Bolshevik party had accomplished the very difficult task of winning over the majority of working class and the majority in the soviets but yet still had not achieved to gain position in the assembly but this was still before the revolution. After the October revolution the Bolsheviks seem to gain strength in support and power. The Bolsheviks gained support gradually. But some of the methods they tried to gain were too extreme and this made them unpopular. The Bolsheviks had made several promises to the people of Russia and Lenin intended to keep them. His first promise was the promise of peace. ...read more.

There was also another decree, which was the right of people of Russia decree but this did not work out that very well. When Lenin came in power he needed to enforce order do this he created the Cheka. The Cheka was the secret police force though many people did not know this. The Cheka was established on the 20th December 1917. This was Lenin's use of terror and it was very unpopular. This was one of the reasons why Civil war broke out in summer 1918. The strength of the Cheka grew continuously especially after the attempted assassination on Lenin. The Cheka launched the red terror in the summer of 1918 and arrested anyone suspicious plotting against the Bolsheviks. The cheka also carried out the execution of the Tsars family so there would be not attempt for Tsarism to come back. ...read more.

This was a big development of the communist party and it seemed to gain support. It seemed clear that Lenin's main aim was to become a one party state. He had taken several processes to ensure this. He first dissolved the constituent assembly. He had banned many opposition parties and had their newspapers closed down. It would seem that without Lenin, the Bolsheviks would not have succeeded and would not have gained power. With Lenin's role in the consolidation of power, it gave them a centralised aim. The white army did not have this. The steps taken by the Bolsheviks seemed very necessary in order to gain power. Like the dissolution of the constituent party and banning of the opposition parties. By issuing the workers decree and land decree he gained support from the people of Russia. Without the Cheka, he could not establish order. It seemed like by the end of 1921, Lenin was an untouchable and seemed more God like. Shafa Mahmood ...read more.