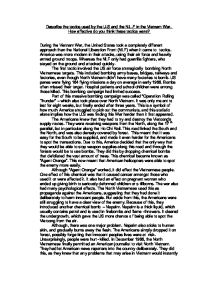 Describe the tactics used by the U.S and the N.L.F in the Vietnam War. How effective do you think these tactics were?

Describe the tactics used by the U.S and the N.L.F in the Vietnam War. How effective do you think these tactics were? During the Vietnam War, the United States took a completely different approach than the National Liberation Front (NLF) when it came to tactics. America was more modern in their attacks, using their air force and heavily armed ground troops. Whereas the NLF only had guerrilla fighters, who stayed on the ground and attacked quickly. The first tactic involved the US air force strategically bombing North Vietnamese targets. This included bombing army bases, bridges, railways and factories, even though North Vietnam didn't have many factories to bomb. US panes were flying 164 flying missions a day on average in early 1966. Bombs often missed their target. Hospital patients and school children were among those killed. This bombing campaign had limited success. Part of this massive bombing campaign was called "Operation Rolling Thunder" - which also took place over North Vietnam. It was only meant to last for eight weeks, but finally ended after three years. This is a symbol of how much America struggled to pick out the communists, and this statistic alone implies how the U.S was finding this War harder than it first appeared. The Americans knew that they had to try and destroy the Vietcong's supply routes. ...read more.

These were areas controlled by the Americans and surrounded by barbed wire. Around 40% of the Vietnamese were moved in this way, but all this scheme achieved was making the Vietnamese detest the Americans even more. Ground troops were also sent into South Vietnam. These troops were under orders to defend only their air bases. They also protected the ports where supplies and troops arrived. These troops were allowed to patrol up to a maximum of 80 km around the bases to make sure that there were no Vietcong in the area. Johnson believed at this time that if he adopted a basically defensive strategy, that this would convince the American people that the U.S were indeed only there to try and protect South Vietnam. Although just a few months later, Johnson told commander of the American Forces in Vietnam, General Westmoreland, that his troops could now follow more aggressive tactics. The U.S used another tactic. They were only interested at this time in searching out and destroying the big enemy forces at this time. In other words, they were trying to eliminate regular or professional troops of the North Vietnamese Army (also known as the NVA). If they were able to do this then they would have to deal with the less well-trained guerrilla forces or Vietcong. ...read more.

This, in my opinion, is the reason that they won. As well as this, the NLF knew when it was right to strike out at the Americans. They were also winning the propaganda war, and managed to make the American people aware that the U.S government had lied about what was going on in Vietnam. They knew that if they were able to attack American morale then it was almost as good as winning the war. The NLF decided to go for one final surge, just to make the Americans clearly aware that they had no chance of winning this war. American taxes had just been raised due to the huge strain on the economy of the war, and morale was already quite low. So the NLF launched the "Tet Offensive", where in January 1968 they captured 75% of the main towns in South Vietnam. This was the first time during the War that they had been involved in full on fighting with the U.S. But yet again, the surprise element had worked in the NLF's favour and they quickly managed to capture town after town. Pictures and video clips were soon sent back to the U.S.A and propaganda was again damaged. President Johnson now realised that it was his prerogative to end the war, other it would result in a loss for the U.S. Peace talks were then held. The communists in Vietnam had not only survived, but had defeated arguably the strongest nation in the world. ...read more.